You’re not the only one.

About a month ago, Facebook changed their News Feed algorithm to show its users more "relevant and engaging content."

Download our brand new State of Social Media industry report for up-to-date information you can use to upgrade your social strategy.

Engagement is more important than ever - particularly for businesses looking to increase their organic reach on Facebook. Because the social media heavyweight has increased the emphasis on personal accounts within its News Feed, it’s becoming increasingly difficult for brands to connect with the fans they’ve amassed over time.

While doing my research, I was surprised at the distinct lack of engagement. Most Pages with tens of millions of Likes were getting, on average, only a few hundred engagements on each post.

That being said, many of Facebook’s biggest brands are doing creative things to fight the influence of the platform’s recent algorithm change.

I decided to take a look at a few of them to see exactly what they’re doing and how you can use their strategies for your own business, whether you’re trying to increase your Likes or better connect with the fans you already have.

Tasty, Buzzfeed’s food-focused Facebook Page, is a rare exception when it comes to Facebook’s crippled engagement. With 66 million Likes and counting, Tasty has 8 times more Likes than its parent page and has continued to shine in what feels like the Dark Ages for Facebook businesses.

The content the Page posts consists primarily of Buzzfeed’s food-related articles, as well as their bread and butter (pun intended) content: short videos of delicious recipes along with links to these recipes.

From a marketing perspective, the type of engagement Tasty receives is incredible. Because of its universal appeal, the content Tasty posts is much more likely to be shared. Their entire content strategy is built to be viral, and it works.

Not convinced? Behold the engagement they got on this video of a chicken parmesan recipe and tell me you’re not at least a little impressed: 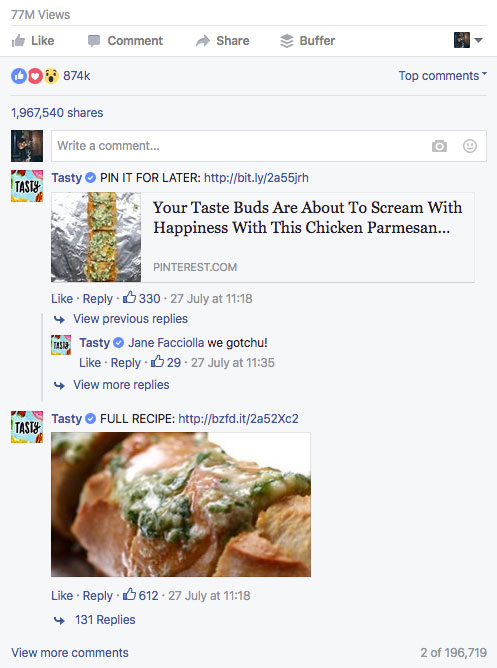 So why exactly is Tasty so successful?

Though this strategy has clearly shown the biggest returns, not just any business can pull it together. Tasty is a specially-built, finely-tuned machine for content marketing, and not every business has a product that appeals to so many people.

In the past, it was much easier to get away with posting a ton of your own content, most notably things like blog posts. Because what people see on their News Feeds is so heavily based on engagement, it can actually be a detriment to focus on posting blog-centric content.

Like Tasty, try to find or create content that’s universally appealing to your target audience that isn’t directly linked to your product. Stop using Facebook as an extension of your website and instead, focus on driving engagement and generating buzz around your brand as a whole.

By posting content that appeals to a larger number of users, it makes sense that you’ll start to attract more Likes, comments, and shares. This is key to reaching customers when it counts. When the time comes for you to post product-focused content, you’ll reach a much larger number of users due to the increased engagement on your previous posts. Because of its new algorithm, you’ll need to update your Facebook content strategy to match.

Frankly, almost every other brand’s efforts pale in comparison to Tasty’s, particularly when you look at the engagement these brands attract.

However, it’s obvious that other brands are trying a variety of different things to combat the effect of the algorithm on their Facebook success.

For example, soft drink company Coca-Cola reaches out to its fans and followers to beat the new algorithm. Recently, the world-renowned soft drink company hosted a Facebook contest on its Canadian Page featuring a prize with a getaway to the Montreal music festival, Osheaga.

To participate, entrants need to take a selfie with one of Coca-Cola’s new “Play a Coke” bottles and post it to Facebook, tagging Coca-Cola’s Facebook Page and using the hashtag #FestivalWeekend. Though this seems pretty standard as far as social strategies go, social media contests have special applications when hosted on Facebook.

So what does this do for Coca-Cola?

Essentially, this contest is a means to curate user-generated content and, more importantly, increase organic reach.

How? Well, as I’ve said on a few times in this article, the new Facebook algorithm prioritizes content from friends and family. By getting its fans to post personalized images featuring people enjoying Coke products, the brand creates a network of people spreading the word about Coca-Cola. And because it’s a contest, chances are people will put a little extra effort into their images, meaning the average quality of the photos is higher. 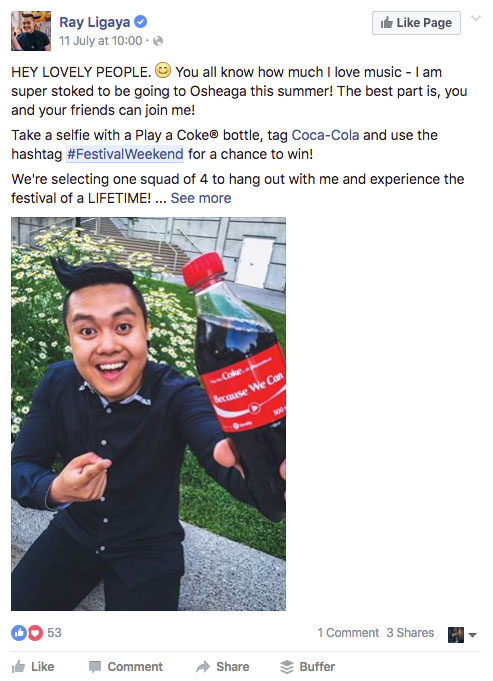 Most importantly, however, is the fact that Coca-Cola can rely on other people to increase its contests' organic reach. Participants’ families and friends see their entries, and word spreads about the contest (the hashtag helps with this) leading to more entries.

Coca-Cola isn’t fighting the algorithm head-on, it’s taking a detour right around it.

Let’s face it: it’s probably not the best idea to throw your time and effort into a black hole, continuously pumping out content that isn’t reaching your target audience. For better or worse, we’re stuck with Facebook’s new algorithm for the foreseeable future.

You’re better off looking for other ways to reach people. Running contests to attract user-generated content like Coca-Cola did is an awesome way to connect with potential customers for several reasons.

Secondly - and more importantly - it allows your product to reach customers without the impedance you’d normally experience through the new Facebook algorithm. Because users’ friends will be sharing content related to your business, they’ll be more likely to see it.

For more on user-generated content, check out our article User-Generated Content: How to Get It and Why You Should.

Consistently one of the slickest brands on social, Red Bull has looked towards another type of content to increase its Facebook reach: live video.

If you’re unfamiliar with Red Bull’s social strategy, here’s a quick refresher from my article Trending Titans: 6 Facebook Tips for Your Business. The brand deliberately shies away from referencing its extensive range of energy drinks, instead focusing on the culture it has built around extreme sports. This bold marketing strategy helps Red Bull differentiate itself from its numerous competitors in an industry where products have been largely commoditized.

So, in typical Red Bull fashion, the energy drink giant teamed up with adventure filmmaker Sebastien Montaz and shared live video with its fans and followers from the summit of Mont Blanc, the highest peak in western Europe.

Sharing the sunset from the summit of Mont Blanc, highest peak in western Europe 4810 m

Red Bull climbed its way to the top of Facebook users’ News Feeds using Facebook Live in a few ways:

The effect live video had on Red Bull’s engagement was immediate and apparent. The video garnered over 37 thousand Likes, a significant increase above the Page’s average of five to ten thousand Likes on its regular videos.

What’s the lesson here? Well, Red Bull found success by responding directly to the changes Facebook made to its News Feed algorithm. Simple, right? When Facebook says do live video, you do live video.

The key, however, is that Red Bull took this new content type and approached it in a unique manner. Unless you’re a celebrity, you’re probably not going to get much engagement talking to your phone from your desk.

As marketers, we’re well aware of first-mover advantage: the attainment of a competitive advantage, often characterized by technological leadership.

In less stuffy terms, it's about being the first to adopt a new technology.

Though this often relates to product development, it’s just as relevant when considering content. Think about it - while scrolling through your feed, you’re much more likely to stop and look at a piece of content if it’s in a format you’ve never seen before. This, in combination with Facebook’s tendency to prioritize newer content forms in its News Feed, are strong indicators that you should be trying out these new features.

Still, my takeaway for you here isn’t just to use live video or whatever new-fangled feature Facebook introduces next. No matter the content type - whether it’s live video, 360° video, even VR - you need to use it in a manner that leverages the strengths and differences of the platform to connect with your customers.

Think about creative ways to share this new technology with customers. Selling a new bathing suit? Grab a waterproof case, start streaming on Facebook Live, and dive deep to show off your product in a whole new light. Looking to experiment with 360° video? Explore new heights to bring your viewers an experience they’d never get on their own. And go figure, Red Bull did that too.

With Facebook, you have to play the cards you’re dealt. These are just three of the ways Facebook’s best are trying to stack the deck in their favor.

I’ll be honest with you - it’s getting tougher and tougher to break through to audiences on Facebook without crafting an inventive strategy or spending a couple bucks on advertising.

As marketers, we need to keep our eyes and ears open for creative ideas. If we’re not sure where to look - well, Facebook’s biggest brands aren’t a bad place to start.

So what do you think? What are your experiences with Facebook’s new algorithm? Any other brands you think are doing cool things? Let me know in the comments below!