When consumers are faced with a buying decision they perform the task based on 2 things: emotion and logic.

In marketing we know that emotions are a powerful force that subconsciously influence the way we feel towards a certain brand. The entirety of a brand, the product it offers, the services, its PR, and all the marketing it does constructs an image in our mind. Then our minds associate that brand with specific feelings, much like the feelings we have for another person. Weird right?

We love Apple because they make us feel like the bold creators we see ourselves to be. We hate PCs because we disassociate with a cold corporate machine preventing us from "thinking differently". The brands we choose to buy from are a result of the emotional reactions we make everyday.

Logic, on the other hand, is a different beast. We tell ourselves to make logical decisions whenever possible but as studies have shown decisions are never without emotion.

Let's say you're shopping for a new car. You arrive at the dealership armed with a checklist of features. You're looking for superb fuel economy, 4 doors, heated seats, ample leg room, etc. Of course, the salesperson is able to present you with a litany of options that meet those requirements. But at the end of the day you'll choose the car that "feels" right. On paper every option is logically the same but it's how you feel about a brand and model that sways your decision. That's how emotion and logic work together.

This chart from SmartInsights shows perfectly how marketing is done using emotion and logic. In short, you begin by appealing to the emotions, then present logical reasoning, and end with emotion to build trust and loyalty. 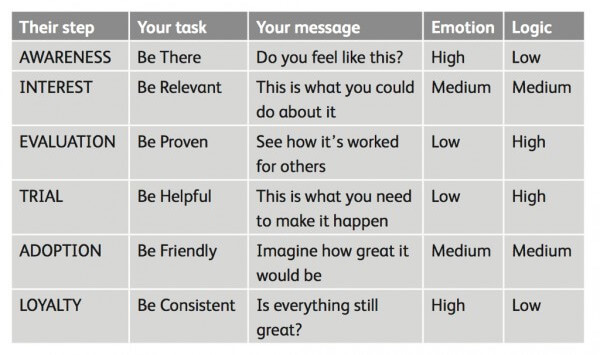 The key is to understand how the human mind frames logical decisions. Since we've evolved from our primitive ancestors we've developed thought patterns both rational and irrational (biases) that influence decisions. These thoughts have worked in our favour when we were running around on the plains of Africa but they don't always help us today.

So, how can marketers pinpoint the logical brain and influence decision making?

As we'll show, the way the human brain works can be manipulated into making what seems like logical decisions.

Understand these 9 psychological keys to make marketing with logic work for you.

9 Psychologic Keys to Remember for Marketing with Logic

Most people would agree that feeling indebted to someone else sucks. It jabs at our minds and causes unnecessary stress. We all have the underlying need to pay back a debt.

Ensuring what you offer is of real value is how you can leverage the rule of reciprocation.

You'll see the rule of reciprocation at play in many areas of marketing. Lead generation or list-building for example, has people offering high-value lead magnets in exchange for lead information. The greater the value a marketer provides the more information they can request from their visitors.

A lead generation form for example, could request only email from a visitor, but if the lead magnet is of high value the business could ask for more. Make the email mandatory but include other fields like business website or position title. If your lead magnet provides value your visitor won't hesitate to provide more. 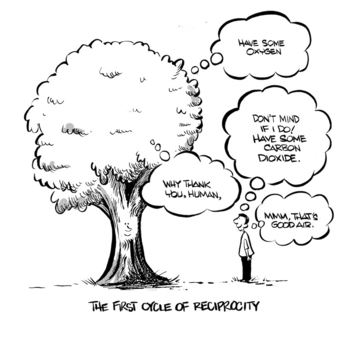 Remember — value is completely relative. If I tell you that a new TV is $1,000 that might seem expensive. But if I said that the regular price is $4,000 logically you're getting an awesome deal. You'll be happier with your purchase and most likely come back and shop again.

Businesses do this all the time. They'll put the big ticket items up front, show you them, and then lead you onto the less expensive ones. Never start with the low price. Start high and go low. Contrasting prices with a competitor or featuring a steep discount is one of many ways this can be applied to your marketing.

People tend to act fast when supplies are limited. A countdown timer or supply counter can create an immediate reaction when supply dips.

Logically most people would prefer to receive satisfaction now rather than later. Most people will claim a deal immediately for fear that it won't exist tomorrow. 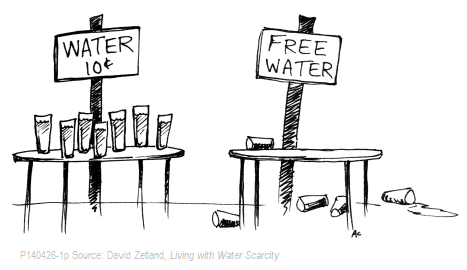 People automatically trust things that seem official. Recommendations from public figures, secure transaction logos, and stellar testimonials are only a few signals of authority. Words written on official letterhead or a blog post on the New York Times all communicate authority to the reader.

To show that you are in a position of authority try putting things in writing. Show evidence in the form of case studies and reports. Anything that you do to add credibility to your name instantly increases your authority. Authority makes your business the logical choice.

People have a tendency to interpret or recall information in a way that confirms their existing beliefs. When we're presented with subject matter that is controversial or emotionally charged, we tend to interpret it how we want. It places more weight on evidence we strongly believe to be true and can create statistical errors.

Politically left sided people will see everything the right side does as egregiously wrong and vice versa.

What this means for marketers is that first impressions are critical. What a consumer sees and interacts with first will be the basis for their decisions going forward. A consumer will likely react more positively with a business that shares their values and beliefs. Knowing those values and beliefs are key to shaping logical choices.

In psychology this refers to a person's tendency to place emphasis on internal characteristics of a person rather than some sort of external factor. For example, a person that runs a red light and almost t-bones you is a reckless and irresponsible human being. But maybe they were rushing their pregnant wife to the hospital. That's an attribution error.

Companies that take responsibility for their actions are deemed more trustworthy than those that don't. For marketers what you do says much more than what you say. Saying you stand for [X] and doing [Y] creates an attribution error. Thus rectifying a shipping error, though not your fault, will solidify you much more as a company that cares about their customers.

This is the tendency to blame outside forces rather than your own personal faults. Positive feedback is attributed to our own skill while negative feedback is due to the fault of the system.

You'll see this often in clickbait-esque blog headlines, "5 Things Ultra Productive People Do Everyday". People who see themselves as ultra productive will share this to shower themselves in praise and point out a flaw in others.

Marketing that points out a flaw of a consumer is fairly common. You're overweight, have poor time management, and/or are lazy. It would be more effective to frame the problem as something that is victimizing the consumer rather than it being a fault of their own. This way their choice would logically conform with the image they have of themselves as awesome and not less-than awesome.

(You're not clumsy, drinks are just too hard to pour!)

Though similar sounding to the confirmation bias, the belief bias is something very different. The belief bias is our tendency to reject something because it sounds too extreme or outrageous, even if the evidence is there and the argument is sound.

This implication is why we sometimes see deals that are "too good to be true". Even with the logical proof a belief bias like that can hurt sales. In this case you'd be better off making the deal more realistic rather than providing more evidence to support the deal.

In terms of marketing it's important that logic is best used after a consumer is already emotionally invested in the purchase. The gut reaction consumers have often has more influence than logic does. Instead of advertising a 90% sale on a high ticket item, maybe bring it down to 75%. Instead of claiming that your dating service will find one's soul mate, draw it back a little and say that one will go on more dates than ever.

Loss aversion is our tendency to avoid losses rather than acquiring equivalent gains. It is better to save $10 than it is to find $10. Marketers know that we would rather save 25% than pay only 75%. The theory states that satisfaction would be higher saving 25% rather than spending only 75%.

Loss Aversion, also known as the endowment effect, makes us place a higher value on something we own than on an identical item we do not own.

To make use of this marketers must change the way they frame their language. Speak about what your consumer is going to lose instead of gain to create action. Write copy in a way that implies your audience already has the product. All of this will trigger a loss aversion.

This is the purpose of a free trial. Your consumer experiences your product and stands the chance of losing all they've gained by not continuing to subscribe. "I can't lose all this time/money [X product] is saving me!" Taking away special privileges or removing special features will bring users back to your platform.

Tying This All Together

As we've seen decisions are made with both logic and emotion. The most effective marketing appeals to emotions first, then presents the logic, and ends with emotion to build trust and loyalty. The emotion-logic sandwich.

To manipulate the logical brain, a marketer must be aware of these 9 psychological keys: