In today’s article, I’ll walk you through everything you need to create Facebook Promotion Guidelines and Rules:

Let’s begin with a quick overview of the most common things we get asked about running Facebook Promotions:

You can ask entrants to do any of the following actions to enter your Facebook Promotion:

Unacceptable Entry Methods: You aren’t allowed to ask entrants to do any of the following actions to enter a Facebook Promotion:

After a person enters a promotion, you can ask them to Like your Facebook Page (or multiple Pages) to get more chances to win. Facebook’s Promotion Guidelines doesn’t let you do this as the primary promotion entry method, but you can use it to let people get extra chances to win after they enter using an entry form.

Here’s an example of a Like a Facebook Page for Bonus Entries entry method. This appears in a popup that is shown after a person enters using the promotion’s entry form: 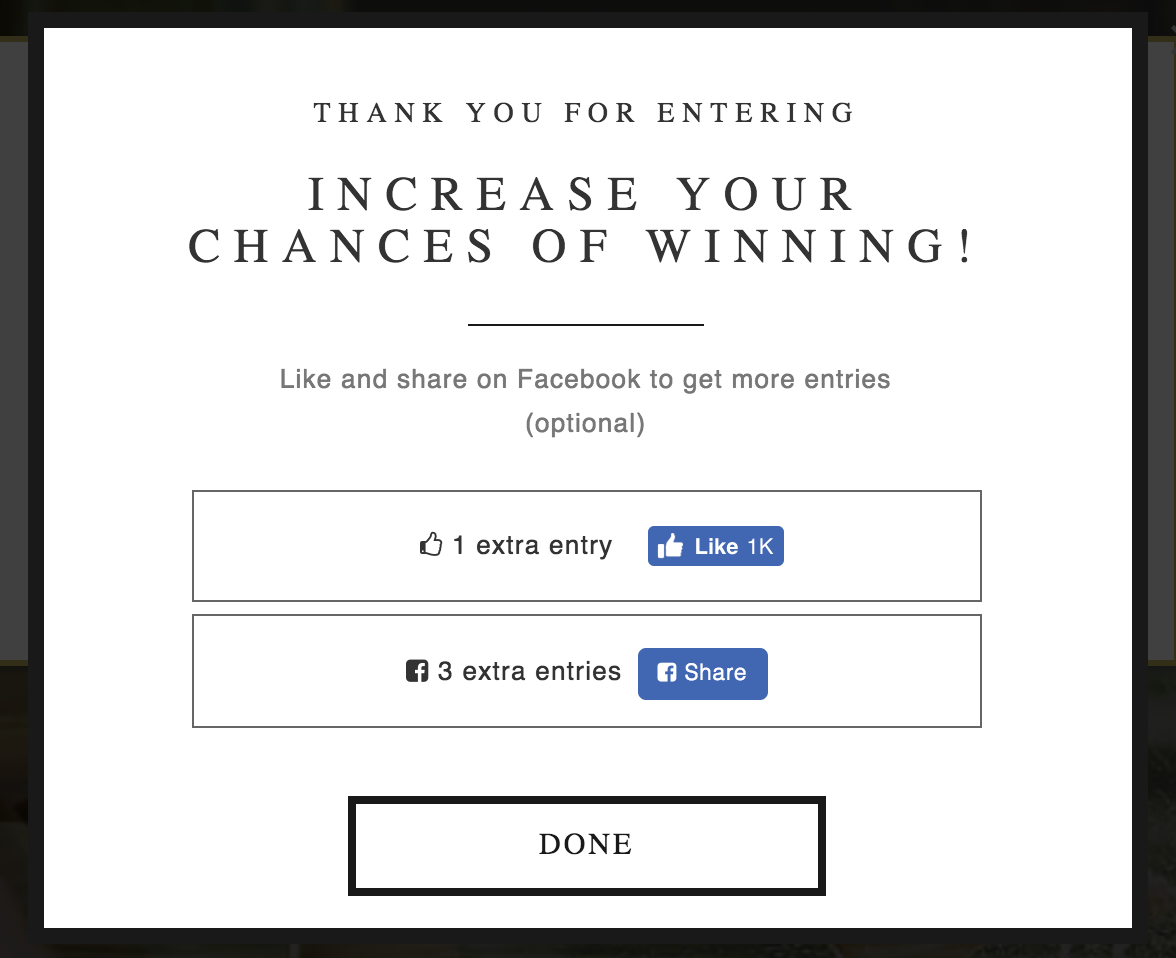 The Like-Gate Overlay appears over top of the Promotion page when a person first visits it. The overlay asks people to Like a Facebook Page. But this is only optional as you can’t force people to like your Facebook Page to enter your Promotion anymore.

As you can see in this example, there’s an option on the ‘Like-Gate’ overlay to bypass it by clicking ‘No, thank you’. Clicking this closes the overlay and gives the visitor access to the promotion page. 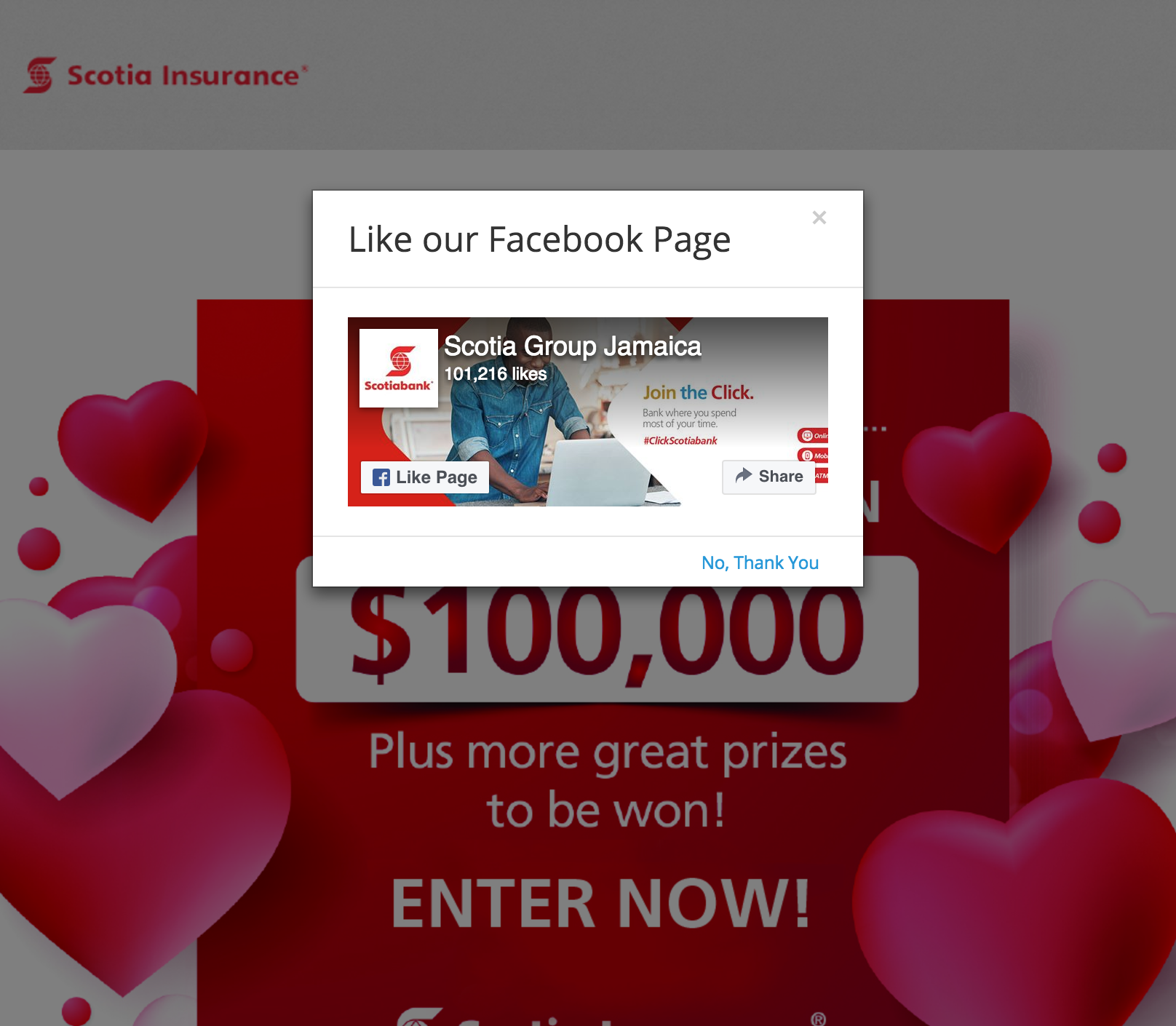 Even though it’s optional, the Like-Gate Overlay still does a great job of getting people to Like your Facebook Page, as it’s the most prominent action to take on the page.

Facebook used to be very strict about how you could contact winners of your Facebook Promotion. Initially they didn’t want you using thing like Facebook posts and messages, as they thought it would lead to spamming, but they’ve since lifted those restrictions.

We recommend email as it’s the most reliable way we’ve found to reach the winner.

Facebook has strict regulations for running any kind of promotion, giveaway or contest on their platform. As of now, Facebook doesn’t allow you to run a promotion on a personal Profile, so you need to do it on a Facebook Page’s Timeline or Tab.

If you want to change a personal Profile to a Facebook Page you can do it here: [https://www.facebook.com/pages/create/migrat]e](https://www.facebook.com/pages/create/migrate). This let’s you to maintain all of your friends as Page Likes and keep your profile and cover photos. But it won’t copy your posts to the new Facebook Page.

*What These Guidelines Means and How to Comply with them *

Here’s what these guidelines mean for your Facebook Promotion:

There are also a few Facebook Page Guidelines (outside of the Promotions section) that pertain to running Facebook promotions. Here’s a breakdown of the one’s you need to comply with:

What this means and how to comply:

If you ask people to enter their personal information, such as their name and email, or any content like images or videos, you have to make it clear that you are collecting it, and not Facebook. To comply with this guidelines, you just need to use your own branding, name and imagery on the promotion page, and not say that Facebook is in any way a part of it.

Unless you’re trying to scam people by pretending you’re Facebook, then this isn’t something to worry about.

Also, if you ask people to submit any personal information or content you must obtain their permission to re-use it publicly in the future. This applies if, for example, you want to publish a Facebook Page cover photo with pictures of people who entered your promotion.

The best way to get their permission is to add an opt-in checkbox in your promotion’s entry form, that allows entrants to choose to give you this permission.

Here’s a simple fill-in-the-blank Facebook Promotion guidelines template to help you create your own. Please keep in mind that it’s just a guide and you need to have an actual attorney create any Facebook promotions guidelines to be safe.

If you have any questions about Facebook promotion guidelines, don't hesitate to reach out in the comment section below!