There’s no doubt that for large and small businesses alike, the web drives sales.

Having a strong online presence is necessary for virtually every industry to remain relevant and competitive. Pew Research found that 8 out of 10 Americans shop online, saying, “Americans are incorporating a wide range of digital tools and platforms into their purchasing decisions and buying habits.”

So it makes sense that a successful marketing strategy would include both your website and social media platforms...

While the landscape of social media marketing has changed a lot in the past few years, Facebook has managed to increase users than any other platform (up to over 2 billion, now!)

It’s a crucial social media platform for your brand.

As Jayson DeMers pointed out in Forbes, marketing your business on Facebook must begin with optimizing your Page for search.

Every component of the construction and content of your Page should be utilized in a way that will most successfully expand your brand’s reach and produce an increase in conversions.

Strategies to Optimize your Page for Search:

One of the most effective ways to utilize social media is not just to take advantage of the options for engagement, but also to use it to get data and feedback in a timely manner to tailor the experience so that results are never far off.

This may be something as simple as the color of a banner, but it may also mean testing which hashtags produce the most responses on a given post, or how navigation variations effect conversion rates.

According to the Wishpond Marketing Dictionary, "A/B testing is a method of controlled online marketing experiments in which a control and variable are tested against each other to optimize for conversion. Also called "Split Testing."

Consistently performing tests to ensure that each and every aspect of your site is crafted for the best possible results should be at the top of your marketing goal priorities.

Outdoor retailer L.L. Bean has created the type of Facebook page experience that all brand’s can learn from. Specifically:

Here's an example of one of their posts which features a few of these best practices: 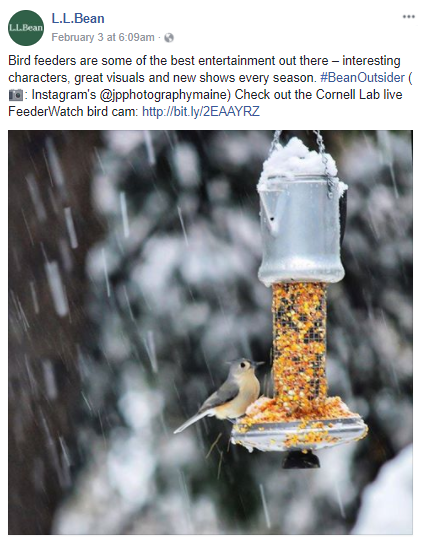 If you’re in the process of determining which social media platform your business should be on, don’t let yourself be swayed by the numbers of users alone; instead make sure you’re current and staying ahead of the curve.

Not only that, but Facebook is losing the next generation of consumers to the likes of Instagram. Natasha Lomas of TechCrunch writes that the trend suggests, “younger users are favoring newer and more visual communications platforms.” Your website engagement strategy should not only address relevancy today, but tomorrow as well. 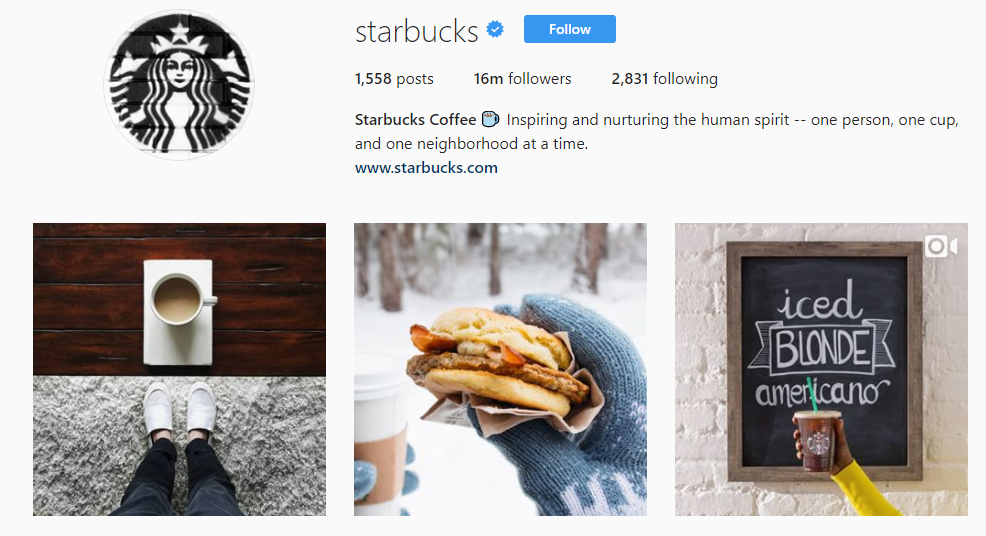 Starbucks is a solid example of a company that understands how to use Instagram to connect with their customer base. They regularly use the platform to promote new products, like an americano made with their new blonde espresso. Posts that feature products are balanced by those that feature customer photos, such as the two most recent in their feed (above). In doing so, they effectively send the message that their customers’ stories and the Starbucks’ story are intertwined.

In comparison to Facebook and Instagram, Twitter has the smallest amount of active users. However, before you decide it’s not worth your marketing efforts, consider what Twitter manages to offer in comparison to the others...

Overall, the point is that Twitter makes it easier than any other platform to engage your target market in your same industry and to create (or reshare) content that will be engaging to prospective customers.

As Brian Solis says, “The experiences that customers share with other customers online… form the basis for a brand’s image. In the digital age, shared experiences are captured in online searches and conversations, shaping customer perception like never before.”

One of the most competitive markets in the United States is the hospitality market in New York City, and standing out within it is a serious undertaking. The Roger Smith Hotel, despite being a small, boutique hotel in Manhattan, is an example of a small business utilizing Twitter to do just that. 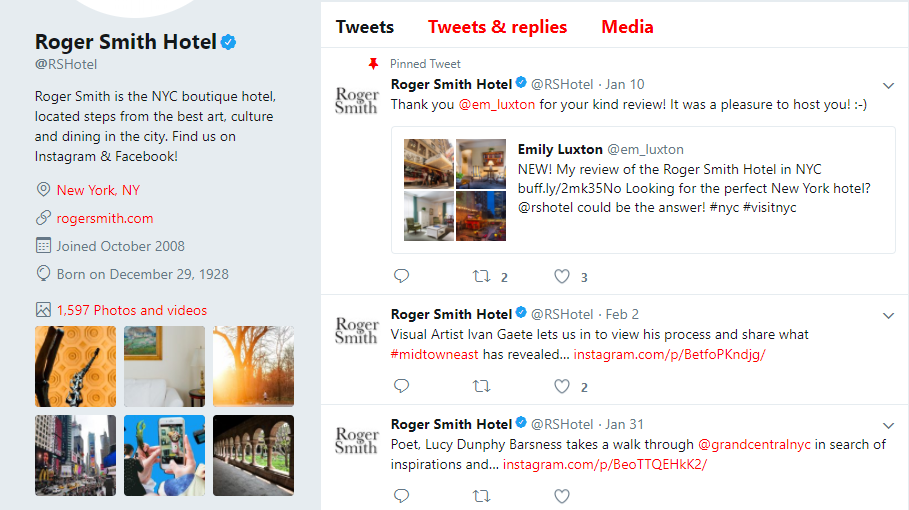 After inviting social media influencers and journalists to try their services, they were able to reap the rewards of the large audience those influencers who had already built.

Their Twitter is consistently filled with pictures of the city, trivia, and coupons; they showcase the fact that the hotel is very much a part of the New York City community, which is exactly what most guests want for themselves when they visit a new city. Guests who book via Twitter receive a discount and they feature a Twitter kiosk in their lobby.

Social media presents options that marketers of the past could never have imagined.

It’s built-in appeal and cost-effectiveness make it a priceless tool in the hands of the savvy professional. And beyond that, it dispenses data almost instantaneously.

As noted by the data experts at the University of Alabama, “Much of [social media's] value comes from what people are sharing and how they express their preferences, but what used to be quantified by counting likes, shares, retweets, and follows has evolved into brands being able to identify what people are thinking and feeling, what’s working and what’s not when it comes to campaigns, and how best to engage with their audience.”

For those hoping to bolster brand awareness and build revenue, the starting place is optimizing a website that will keep and ultimately convert customers. The supporting components of that website however (like social media), are how you drive traffic to that website and find true success.

Avery T. Phillips is a freelance human being with too much to say. She loves nature and examining human interactions with the world. Comment or tweet her @a_taylorian with any questions or suggestions.