New leads are both exciting and terrifying. They’re the lifeblood of your business, but they often go as quickly as they come.

To ensure these new prospects don't abandon your sales funnel immediately, you need to follow up effectively. One wrong move and they’ll drop you.

Maybe you were too pushy. Perhaps they lost interest before your call to action. Whatever the case, there’s no need to make the same mistakes as thousands of other companies.

To learn exactly how the top SaaS companies follow up with new leads and customers, we at Inside SaaS Sales put in the effort.

We signed up to every one of the Montclare SaaS 250 (the top 250 SaaS companies in the world) as well as 31 of the top startups on AngelList. We used a fake Virgin employee's details, and never replied to any messages - so all of these findings are from cold follow-ups.

Want to learn how the top 281 SaaS businesses follow up with their new leads? 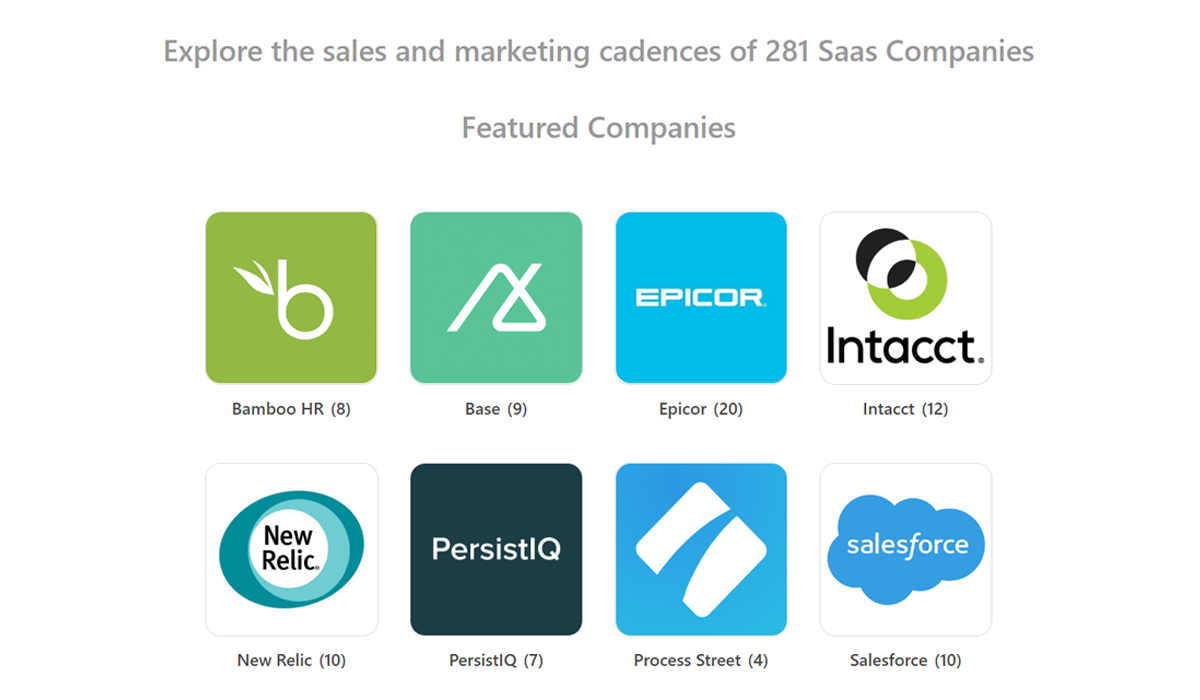 It’s hard to know how long you should follow-up with a contact for before cutting your losses and focusing on the next lead. While this would ideally depend on the potential value of the lead, at a certain point it becomes more efficient to have a cut-off point.

On average, companies followed up with up for nine days before giving up. The longest chain of contact was iDoneThis (who kept going for 36 days before pulling the plug) while most gave up after around a week. 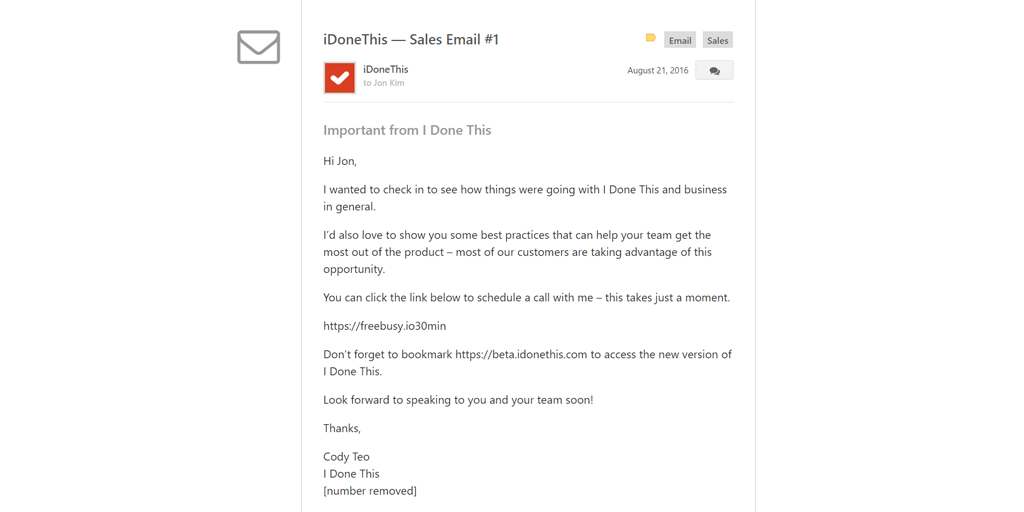 This could indicate a few takeaways you could apply to your own business:

Whatever the reason, the point stands that it’s probably not worth spending much more than a week on your follow-up attempts if you want to follow in the footsteps of the top SaaS companies.

Send one email per day (on average)

On average companies sent one email per day, but that doesn’t mean the rate was consistent. Many took the first few days to truly capitalize on the momentum from signing up.

Close.io has shown that users are more likely to convert if you follow up with them immediately; interest tends to wane once the “honeymoon” period is over. In other words, it’s best to strike while the iron is hot and then slowly reduce your follow-up material to avoid annoying your audience.

By sending multiple emails on at least the first day, these SaaS companies are able to quickly convert any easy deals and set a solid foundation for those which require more work.

Not to mention that this saves on resources you might otherwise waste on trying to convert leads who aren’t a good fit for your service.

Use marketing automation to lighten your load

Business process automation is a powerful tool which saves companies millions of work hours every year. By automating simple tasks (such as sorting leads into pre-built follow-up lists with Wishpond) you can prevent your team from having to spend man hours to do the same thing manually. 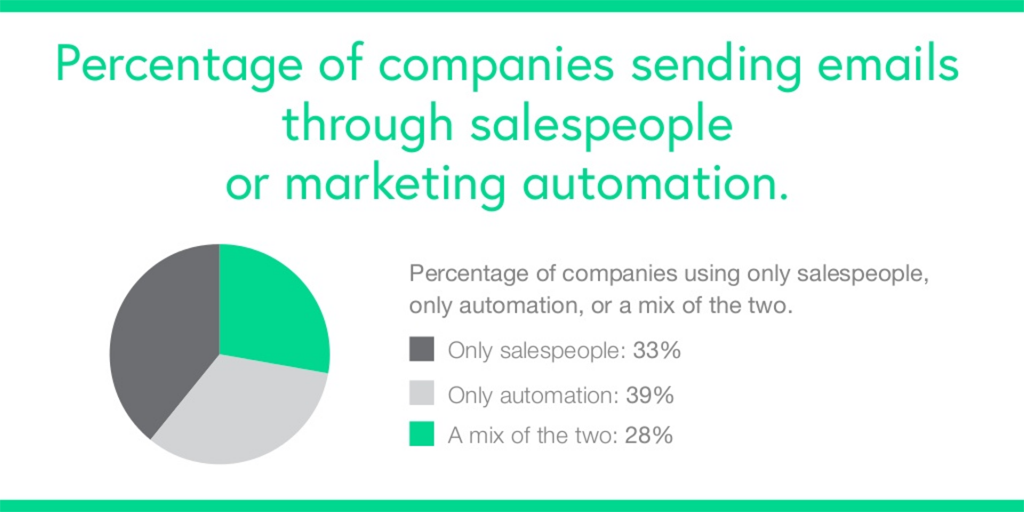 It’s cheaper, easier, more reliable (due to a lack of human error) and better for your team’s morale. After all, they will no longer have to perform the same menial tasks and can focus on what really matters.

The top SaaS companies are well aware of this, hence why 67% of them handed us over to an automated marketing email campaign. It’s a great way to follow up with potential customers while allowing your dedicated salespeople to focus on high value deals.

To prove this point further, while 28% of SaaS companies surveyed used a mix of outreach from salespeople and automated services, the largest proportion (39%) used only automation.

As long as you carefully construct your marketing and sales funnel, this will leave most of the conversion process to an automated service. After all, who doesn’t love stress-free user conversion?

The last thing you want is to annoy your leads to the point that they give up. One of the best ways to do this is to lean too heavily on sales or marketing content; the former makes users feel valued only as much as their wallets, and the latter stops them from seeing how to get the best used out of your product.

To combat this, 57% of the top SaaS companies sent one sales email every other day. Combined with the average of sending one email every day, it’s easy to see that the companies tended to alternate between marketing and sales content every day.

Doing this lets them retain their leads’ interest (with marketing material) while reminding them of the benefits of converting without being too pushy.

Stick to around 130 words per email

Email length is hard to judge when you’re starting out.

If you send an essay to peoples’ inbox they won’t bother to read any of it. Cut it down too much and you won’t be able to convince them to take action before you close out. 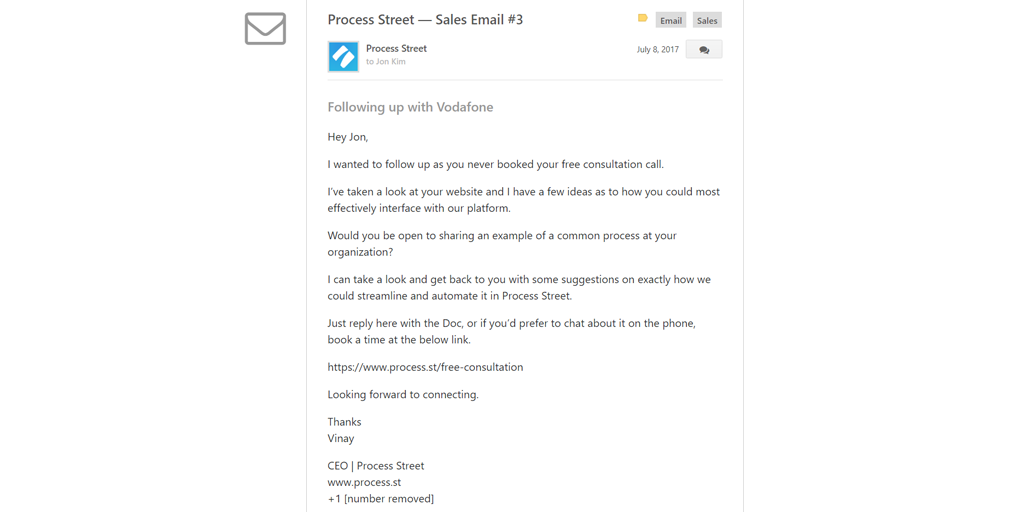 The average word count for the marketing emails we received in this experiment was 133, while sales emails averaged out at 129, leaving the total average at roughly 130 words. Just long enough to get your point across convincingly, but not so long that they close the email as soon as they see what’s to come.

As a side note, if you need help setting up your own drip feed email campaign, Wishpond has some great templates which can get you up and running.

Why risk making the same trial-and-error mistakes as everyone else when the top SaaS companies already avoid them? Use these tips (and the others on Inside SaaS Sales) to get ahead of the game and see exactly how the top companies handle their sales and marketing cadences.

For more tips on creating and running an effective marketing funnel from start to finish, check out "The Foundational Guide to Your Online Marketing and Sales Funnel."

Benjamin Brandall is a content creator at Process Street, where he writes on workflows and automation to help you build a more efficient business.