Do you want to get the most from the holiday season??

Have you thought about Facebook Ads, but aren’t 100% sure how to use them?

This article gives you real-world, holiday-specific Facebook ad examples from businesses like yours – providing inspiration for a successful holiday season.

Ready to use Facebook Ads to drive serious money around the holidays?

MeUndies is an ecommerce company selling (you guessed it) undergarments for men and women.

The unique selling point they’ve provided here is the micromodal fabric “twice as soft as cotton.” Honestly, the Costco-pack underwear I have are pretty comfortable. This feels like a selling point for the product page.

Your ad should tell me something which gets me to click today.

Walmart is one of the most successful and active businesses on Facebook, so I often look to them for inspiration for post and advertising strategies. 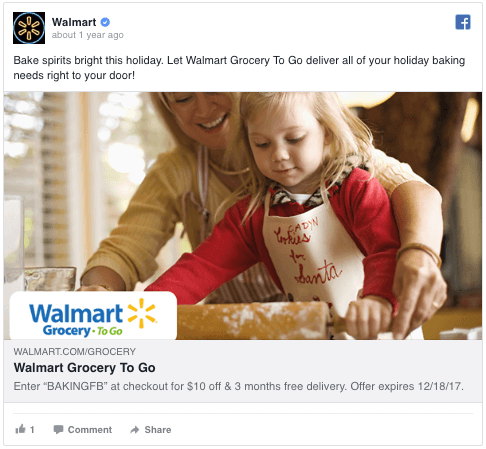 Top Tip: Put a discount code in your ad, bid for brand awareness, then ensure you’re only paying when someone clicks. This will increase the impressions on your ad, but lower the clicks. But you don’t care about clicks, because you’ll be driving people to your site to use the discount code. You could even use the headline “Don’t click this ad.” **Just be sure you’re correctly tracking discount code usages, as this will determine the profitability of your campaign.

Walmart would be better-off if they used the space taken by their logo to feature the value of their offer: “$10-off + 3 Months Free Delivery.”

Warby Parker is an online retailer of glasses and eyewear.

Here’s a Facebook ad they ran last year promoting their giftcards as a perfect holiday gift: 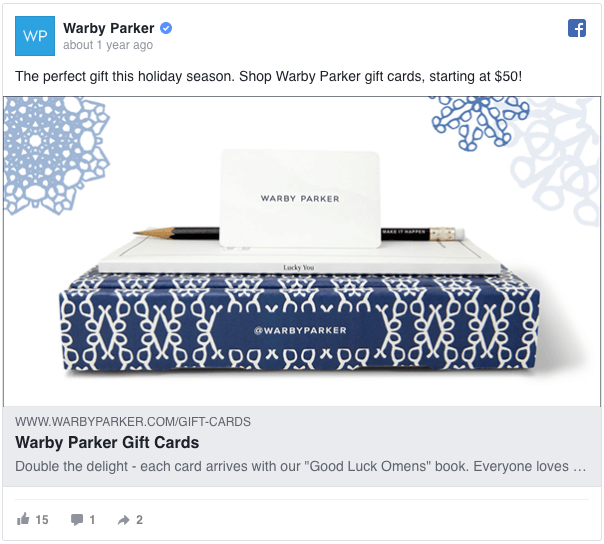 I know that blue is Warby Parker’s brand color, but it’s also Facebook’s.

My recommendation would be to retain the blue snowflakes, but test a red or black box instead – something to attract the eye from the rest of the Facebook newsfeed.

The Cincinnati Orchestra was founded in 1977 and has a holiday performance ever year.

Here’s a Facebook ad they ran promoting that performance:

You can check out the video here, if you’re interested.

Unfortunately this video is simply a series of still images cut together. Don’t get me wrong, if that’s all you have the time or resources for, absolutely do this over a single still image (especially if you have music you can add), but a professionally (or even half-professionally)-done video would yield greater results.

DIFF Eyewear is a trendy, up-and-coming online retailer. They’re known for their “buy one, give one” charitable campaigns. 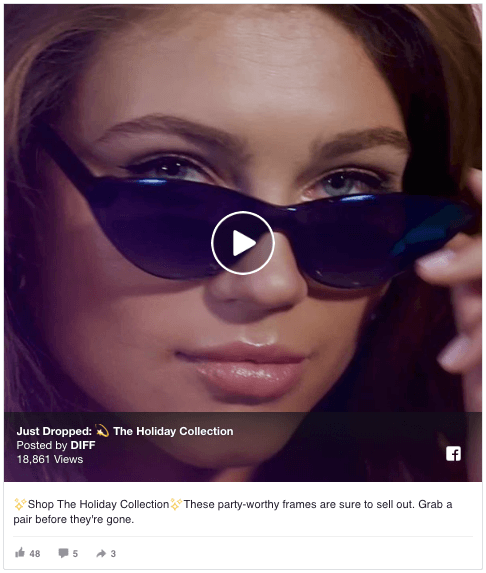 The video (which you can see here, if you’re interested) is good. It’s fun, engaging, and shows the model in different poses with the line “Where’s the party?” superimposed. The problem? I’m only seeing one pair of glasses. TIFF sells dozens. What if I don’t like this particular pair?

Use video to its full potential by showcasing different elements of one product, or multiple products. This maximizes the chance of someone seeing something they want. 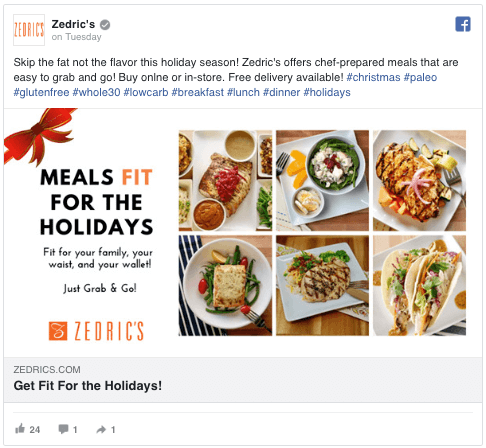 Your Facebook ads aren’t going to pop up in Facebook’s search like a normal post would, because they’re ads, so there’s no point in using hashtags. All they do is clutter up the copy.

Sounds True is an online retailer of self-help and self-discovery books and courses.

Normally I’d say that your image doesn’t have to relate 100% to your product (especially if you’re promoting software or a product less visually-appealing). But this image takes it a bit far in its vagueness.

The offer is for transformational, self-help books. Why not show a happy couple or contented individual similar to the target audience?

If possible, use a human model in your ads every time. 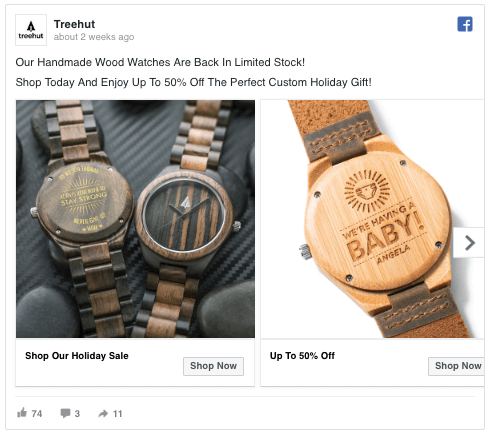 More something to test: the product image:

I’d bet my next month’s salary that this ad would perform better if they used an inscribed watch image which read “David’s groomsmen, 2019” and targeted men about to get married.

Where possible, personalize your ad images based on your target audience, and avoid targeting people with an image or copy which doesn’t appeal to them specifically.

Outschool is an online educational platform, enabling educators all around the world to create and promote courses to people of all ages. 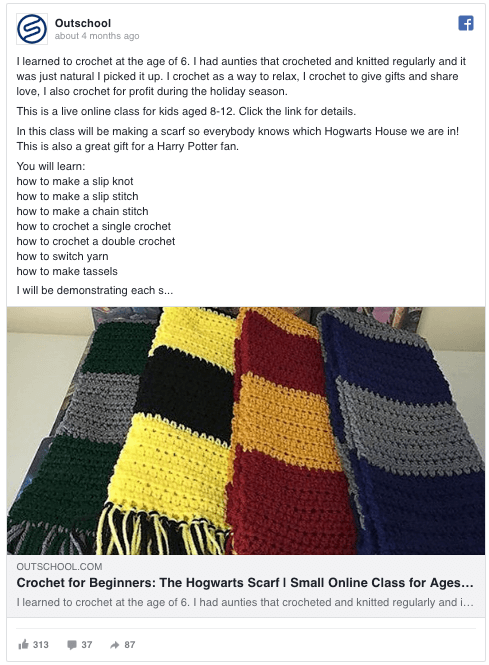 There’s nothing wrong with this ad.

In fact, I absolutely love it. This ad makes me so damn happy I could burst, and there’s one single reason why: It shows that anybody can grow their business and make money from Facebook Ads

This ad was run by Kibibi Oyo, an educator promoting her courses online using “Outschool” – a digital learning resource. The knitting class is for 8-12 year olds, so the target audience would be parents of children that age. And Facebook makes it possible to target those parents specifically – parents who have shown an interest in crafts themselves, or child development, or a dozen other variables.

If you’re wondering whether Facebook Ads can work, just check out Kibibi.

Hopefully these holiday Facebook ad examples have given you a bit of inspiration for a successful holiday season.

If you have any questions, don’t hesitate to reach out in the comment section below!

Want to get the most out of your holiday Facebook Ads?

Wishpond can help. Our ad experts and marketing gurus are just a phone call away. Book a 15 or 30-minute conversation today.