Making your business stand out on Facebook is getting more difficult by the day.

With 2 billion users and every brand under the sun paying for Facebook Ads, is there still any point in posting organically?

The answer, of course, is yes.

Organic posts still get more community engagement than paid posts, and they show your target market that you're not exclusively looking for them to buy. You want to actually develop a relationship with them.

The Facebook post best practices and examples in this article are from businesses who have made organic Facebook work - driving serious awareness and clicks with free posts.

Use an eye-catching image

Grabbing the eye of a Facebook user as they scroll through their newsfeed is tough. You're competing with their family and friends, as well as the dozens of paid ads - all vying for their attention.

As a result, choosing the right image is the quickest way to getting your prospective customer to stop scrolling.

Here's a Facebook ad example with an eye-catching image, from IHeartDogs.com: 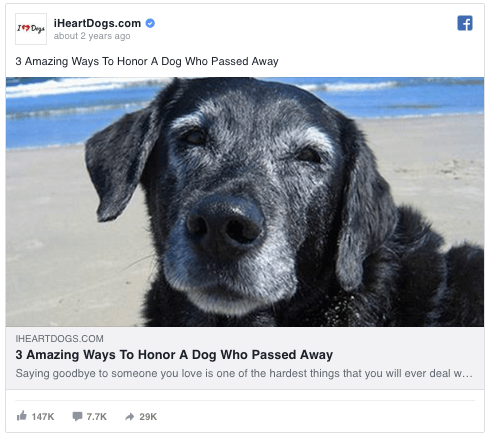 Use bright color in your image

Why do you think they've made statuses so colorful?

Here's an example of a question asked in a Facebook marketing group I'm in: 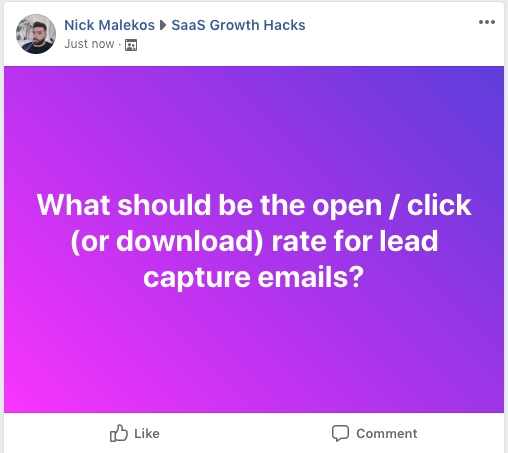 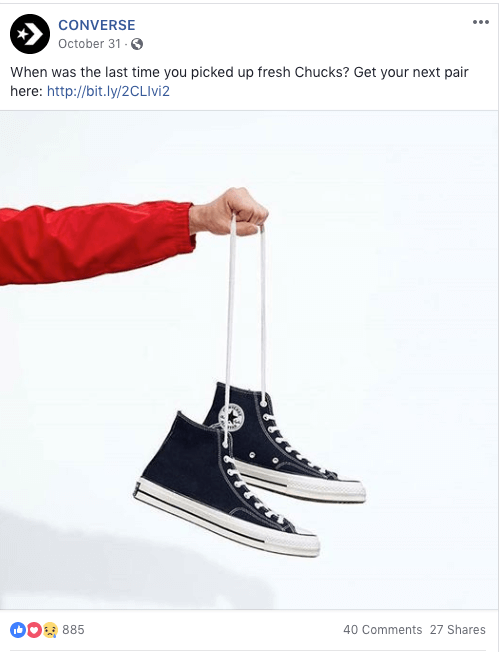 As you can see in this post, a little bit of brightness goes a long way. Without the red arm holding the shoes (they could very easily have been on a table) this post wouldn't get anywhere near as much engagement as it did.

If you've taken a color which is primarily white or just doesn't have a lot of color in it, consider adding a warming filter. It'll add a little bit of yellow/gold to the photo. 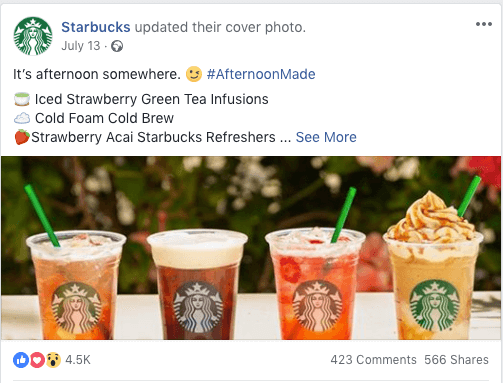 See how there's a tinge of orange to the table, plastic cups and background? Little details like this can help your holiday posts stand out on Facebook.

People aren't on Facebook to hear from your faceless corporation. They're there to connect with friends and family and the side of your business which has a personality.

That's why it's so important of feature your employees and beloved customers - real people. 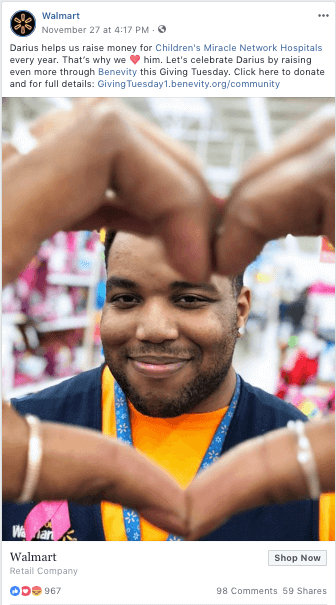 This photo works wonders to make Walmart more personal. And it makes it harder for Facebook users to express their discontent. After all, this corporation is made up of people like Darius.

Even more powerful than featuring your own employees is featuring your customers. They are people just like your target market, and with no vested interest in seeing your company make a buck. For a walkthrough on how to get and use customers in your social media marketing strategy, check out "How to Leverage User-Generated Content: Examples & Best Practices."

The other best practices in this post cover the first of those two reasons, but the second is just as important: You need to be offering something of value to your Fans. 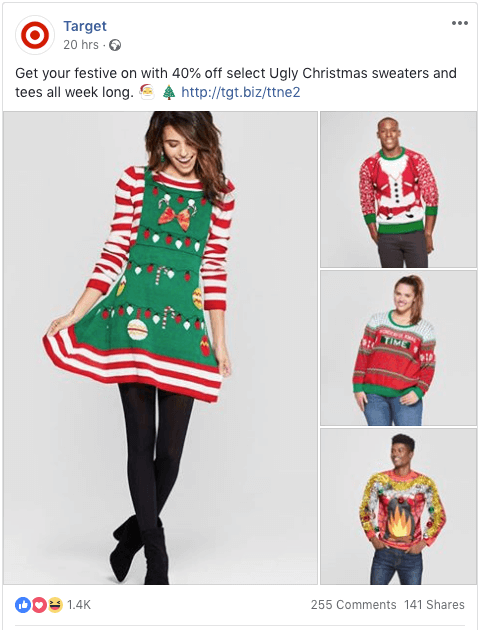 Questions are a hard thing to ignore. It feels almost rude to do so.

Why do you think pollsters and non-profit organizations ask you "Can I have a moment of your time" as you're walking down the street?

They could just as easily say "Hi I'm from Unicef. Did you know….?"

But it feels like the question has to be answered. It can't just be ignored.

It's the same on Facebook. Starting your posts with questions entice people to stop and answer.

And that's especially true in this modern age of sharing our opinions on social media. 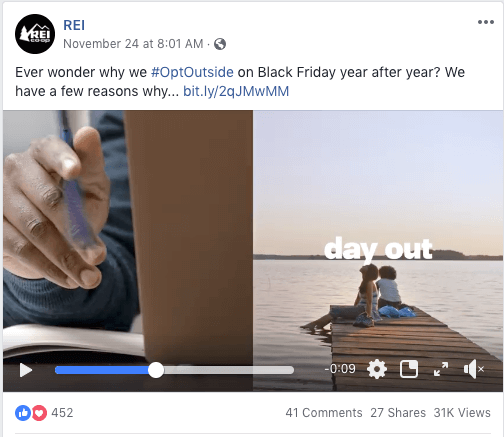 Here's another Facebook post example with a question from software company Atlassian, sharing their most recent blog article: 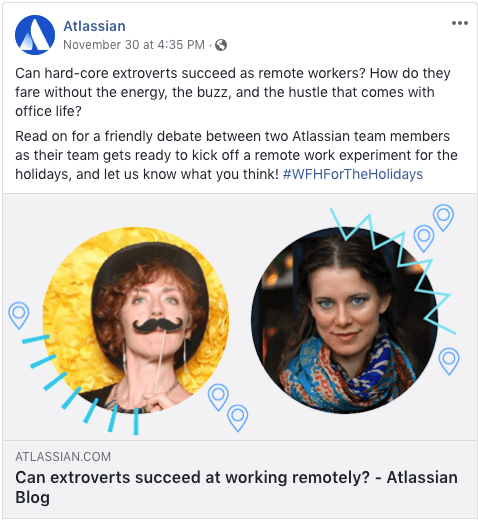 It doesn't have to be a full video (though that's absolutely best practice as well, if you can).

But a simple gif, like the one below, catches the eye far more effectively than a static image.

We're hardwired to respond to movement.

Think about it: you're a homo-erectus, a few million years ago on the plains of Africa. You're watching out for predators, except everything is camouflaged. The thing which saves you before you get jumped by a lion? Movement in the grass. 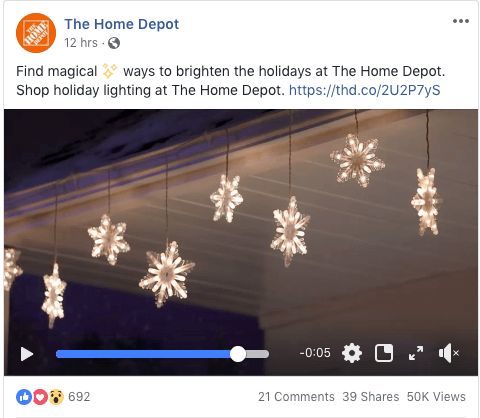 There's nothing complicated here. The hanging stars move back and forth slightly - nothing else. But it draws the eye as you scroll down your Facebook newsfeed.

If you want to turn an MP4 from your phone or DSLR into a gif, try any of the great online converters. I've used this one before, and it works great.

Let me be clear about this: since 2014, Facebook's rules don't allow you to prompt people to Like or Share.

However, dancing on the edge of prompting people to engage is still a great way to get people to do so (and, after all, the more engagement you get on the post, the more people will see it).

The safest way to follow this best practice is to check out businesses that are doing it successfully.

Here's a Facebook post example from Target, in which they ask a question and ask Fans to let them know the answer in the comments: 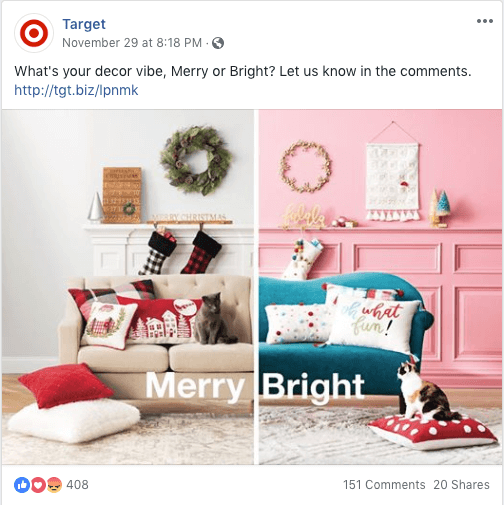 Here's another Facebook post example, from Tim Hortons, where all they do is ask question. But where else are you supposed to answer it than in the comment section? 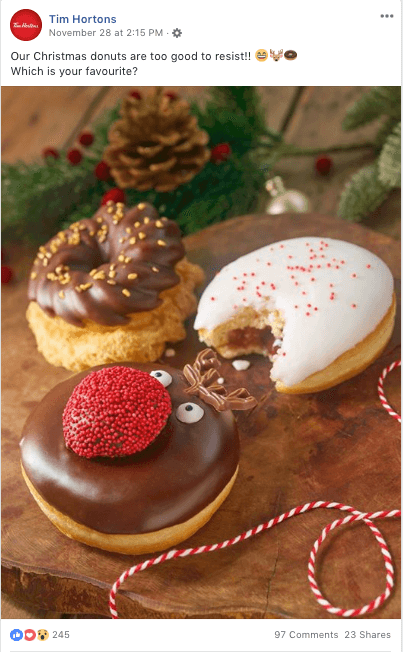 My recommendation would be to only go with engagement prompts you've seen used by other businesses.

Okay so this best practice and the next are a bit interesting (and kind of belie the whole "best practice" thing).

Basically, AdEspresso analyzed thousands of Facebook ads and found that most descriptions were less than 28 words (or two full lines): 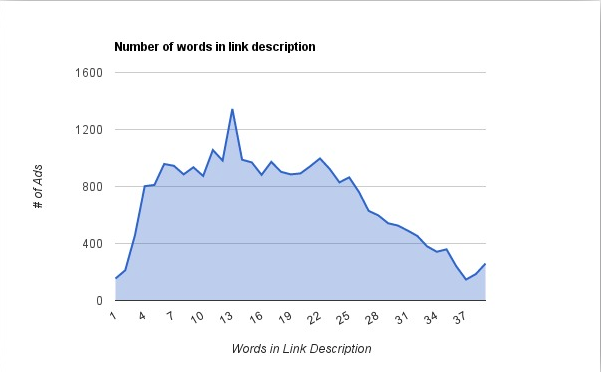 This seems to suggest that the posts/ads which people respond to best are ones with around 13 words in the description.

If you want to see what your post is going to look like before you hit "publish," (when you're sharing a link), Facebook has a preview tool here.

This is the fun part. I was reading an article from Facebook and social media marketing guru [Talia Wolf])https://getuplift.co/how-to-leverage-the-power-of-emotion-in-facebook-ads/) the other week. In it, she said she was seeing 200% increases in her ad engagement when she wrote long, story-like posts.

This is the example she showed: 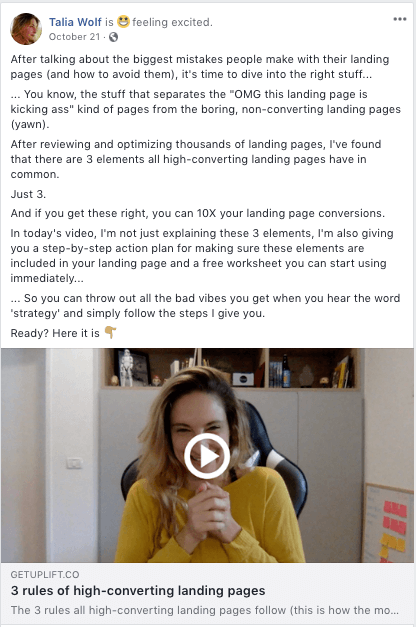 Long story short? You'll have to test it for yourself.

This is my favorite best practice. I love that it works as well as it does.

In order to stand out not just from the Facebook newsfeed but your competitors as well, your business should take a stand. Have an opinion.

Don't get me wrong; I'm not recommending you share your thoughts on every controversial topic out there. I'm saying you can increase brand awareness by taking a stand on a subject.

For instance, Starbucks came out with their no-holds-barred support of Pride: 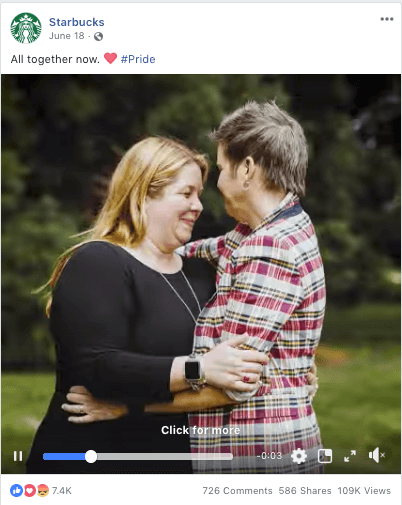 My recommendation here would be to choose carefully.

Be sure that what you're taking a stand on is popular enough that you're not going to lose business with your stance. Also, be sure you actually believe in it. People see through fake corporate social responsibility in a second.

Hopefully these Facebook post best practices and examples have given you a bit of inspiration and a bit of guidance on what you should be posting on your business' Page.

If you have any questions, don't hesitate to reach out in the comment section.