How to Run a Facebook Caption Contest (Step-by-Step Guide)

Caption contests on Facebook are a great way to engage creative people or anyone with a witty sense of humor. They are an easy way to showcase your brand’s personality, help you connect better with your audience and attract followers interested in your company or product.

A caption contest is very similar to a “comment to win” contest. The same rules apply, the only difference is that you’re asking followers to caption an image instead of commenting anything.

You can ask followers to write a short caption to enter the contest. Provide a word limit, (like only 5 words allowed) or let people comment a short sentence. Then decide based on the image or how creative you want captions to be.

Reader's Digest asks for short captions for their monthly caption contest on their Facebook page for funny pictures like the one below. 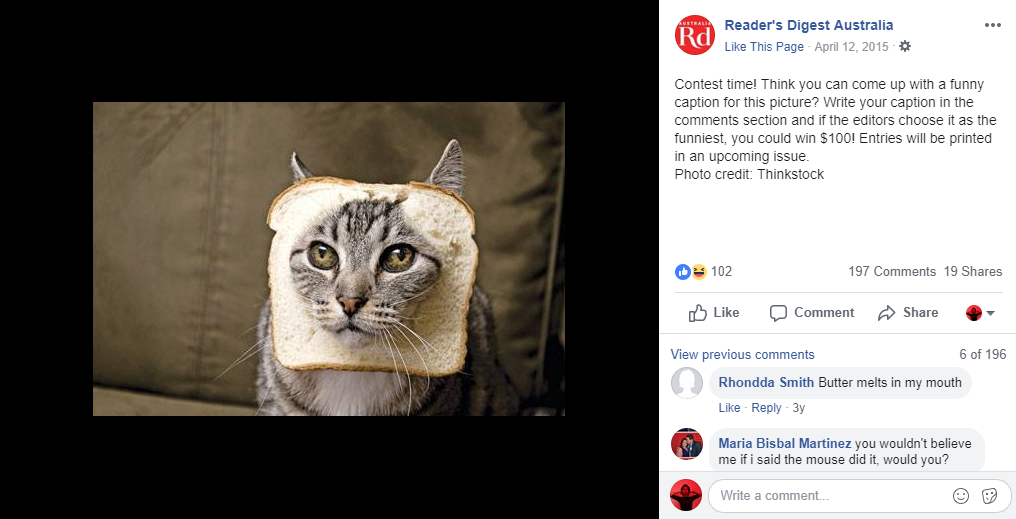 You can ask followers to complete a sentence or statement with a word, number or funny ending. Cruise Junkie did this for their product giveaway.

Cruise Junkie has built a social media culture around a cruising devotion, so they made sure their fill in the blank caption contest reflected just that. Try to do the same for your fill-in-the-blank contest.

Allow your followers to write a short story, poem or statement about your image. This is very popular with brands that cater to writers and creatives, giving them a chance to show off their writing skills.

The Watershed Journal recently had a short story caption contest, but instead, entries were emailed rather than being placed in the comment section. 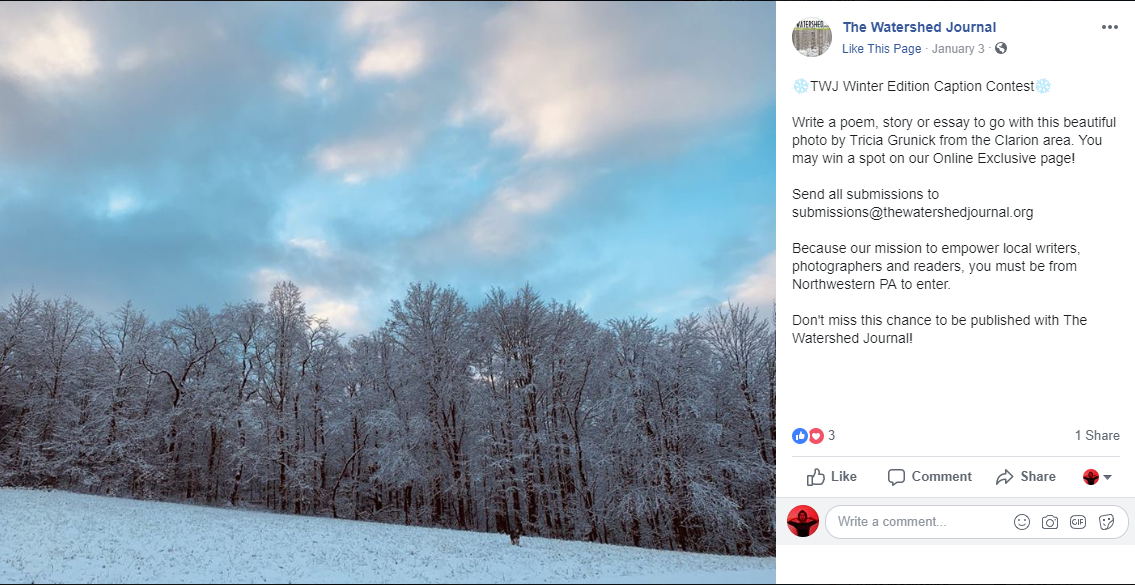 If you want to take this one step further, consider running a photo caption contest on a platform like Wishpond and ask visitors to use their email when entering. That way, you capture leads to action on for sales and follow-up activity at the same time: a win-win for you and them!

This is a great way to keep entries organized and allows you to quickly and easily follow up with participants at the end of each campaign.

As a general rule of thumb, try to make your contest entry requirements as low effort as possible, so contestants don’t feel like they have to jump through hoops to enter.

Try to avoid asking for extra information or adding unnecessary steps. You might have to give up some of that sweet data, but you’ll get more entries and brand awareness in return.

Using the right image for your caption contest can be the deciding factor in its success or failure, so choose wisely. Here are some pointers for picking a winning photo:

1. Avoid Images with Religious or Political Figures or Symbols.

This is a big no-no for any contest or branding on social media unless you’re a politically centered Facebook page or brand. Sometimes mixing your brand with politics can invite unwanted controversy and reflect badly on your brand.

Take the Starbucks #RaceTogether campaign as the perfect example of how politics can backfire. 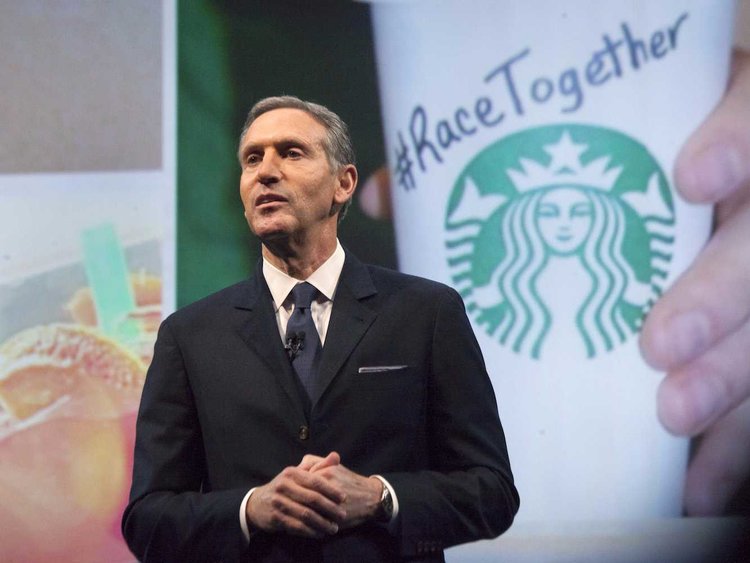 Complex photos or images with little to no context can confuse people. They already have their hands full with thinking up a winning caption; they don’t want to think about or decipher what the image means.

You can see a perfect example of an image you shouldn’t post by Professional Electrician & Installer.

They took a screenshot from Instagram and used it as the image for their caption contest. It would have been best to download and repost pictures from Instagram, or to crop the Instagram frame out, leaving only the photo.

Lastly, viewing this image on your desktop or your phone, it’s hard to focus on what the picture is about, which is the hole in the shelf. You don’t want people to be looking all over the place to get the gist of what the photo is about. 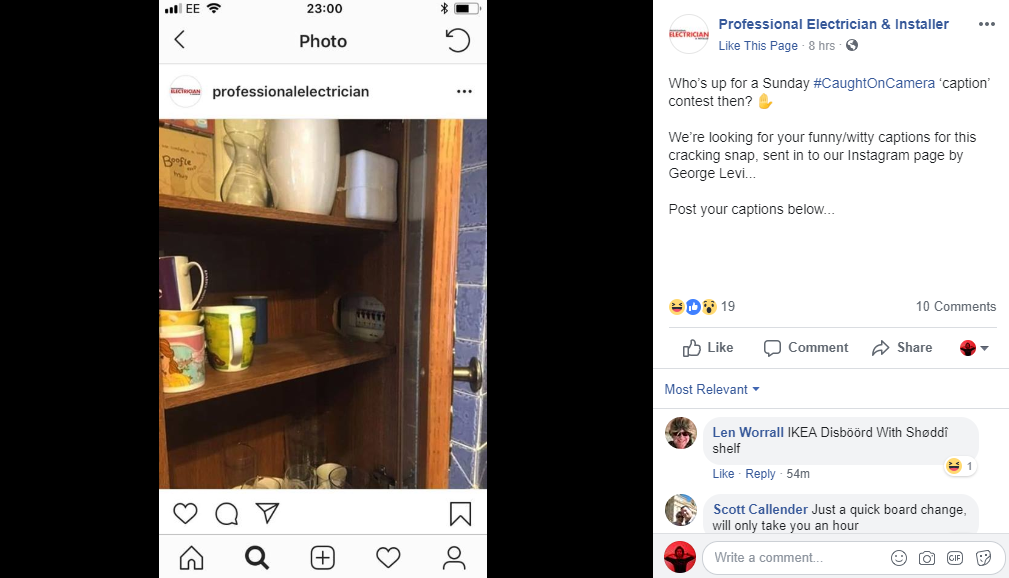 With over 55 billion Facebook users using their phones to browse, it’s key to ensure that your image is mobile friendly.

x 628 pixels, but you can use this Facebook Image Size Cheat Sheet if you’re not sure which size works best. Once you have the right size down for desktop and mobile, you can make it easier for people to view your image and enter without squinting.

Check out ChuChu TV Nursery Rhymes: the image is easy to view on desktop or mobile. 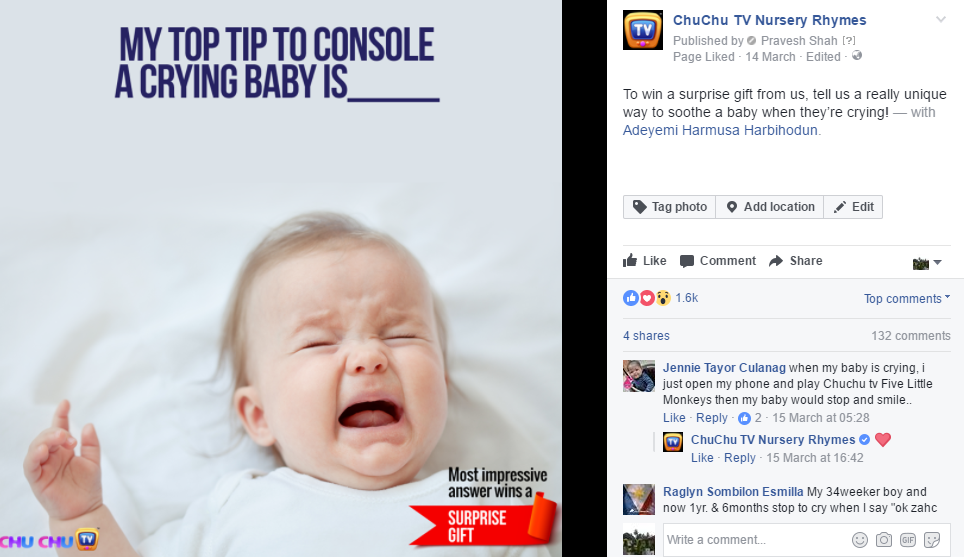 If your image is boring, don't expect anyone to think twice about entering with your caption contest.

You have to choose an image that will grab your followers attention, make them laugh, think, or all of the above. It’s a lot to ask, but to help, you can try a few things:

Use Animals or Babies In Your Photos
Cute, warm-and-fuzzy subjects in images and posts are statistically the most liked and shared on Facebook. A great example of a dog-inspired caption contest would be this post by The Pet Sitters Tale.

Memes in Your Photos

We've all seen a Grumpy Cat or ‘The Office’ meme planted in our newsfeed every now and then. Memes continue to be among the most popular content on social media and that doesn’t show any signs of changing. Using famous or custom-made memes for your caption contest is an effortless way to capture the attention of people going through their Facebook feed. 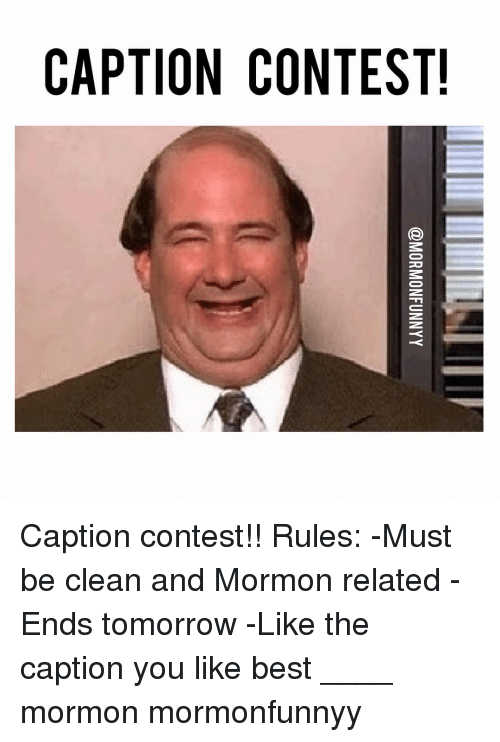 Funnily enough, lack of promotion is the reason most contests fail. Sometimes it isn’t the quality of the prize or the contest itself - just the fact that no one knows about it.

To avoid that, you can try these four proven ways to promote your contest:

Contrary to what some people think, email is still alive and well. It’s reported to make up 59% of how B2B companies make their revenue.

If you have an email list of your customers or followers, you can do an email blast to let them know about your contest.

Don’t be afraid to promote your Facebook caption contest right on your website. You can use a widget or plugin to do it, or create a page on your site dedicated just for it. Use it as a way for people to enter the contest. For example, The New Yorker provides the option to place caption entries on their website.

Don’t limit yourself to promotion on Facebook alone; let your Instagram or Twitter followers know that you have a Facebook caption contest going. This is also a great way to bring over followers from one social media platform to another.

Ads allow you to show off your contest to a target audience that might not have discovered you as yet. It’s also an effective way to bring new followers to your page.

For help running Facebook ads for your contest, talk to Wishpond's team, who can create and manage everything for you from start to finish.

Need help with your contest ads?

Book a free 1-1 webinar to learn how our team of contest experts can help you create high converting Facebook contest ads today.

So you’ve created your guidelines, chosen a scroll-stopping image and hit publish on your Facebook caption contest. Now it’s over and you’ve gotten entries, it’s time to pick a winner.

There are two ways you can pick your caption winner: you can pick the winner yourself, or choose the caption with the most likes. Be sure to explain how you’ll be choosing the winner when you first post your contest to avoid any confusion for contestants.

If you’re selecting the winner yourself, you might wonder, what’s a good caption?

Don’t overthink it. You can either pick one based on what you like, or you can check out these best practices when posting a caption on social media as a guideline for which caption may be worthy of first place.

After you’ve selected your winner, you can reach out to them in the comments, email or message them separately. Just make sure that you create a “Winner Announcement” so other contestants know that you selected a winner. The Oaks Golf Course did this by posting the winner in the comments so anyone viewing the comments would see. 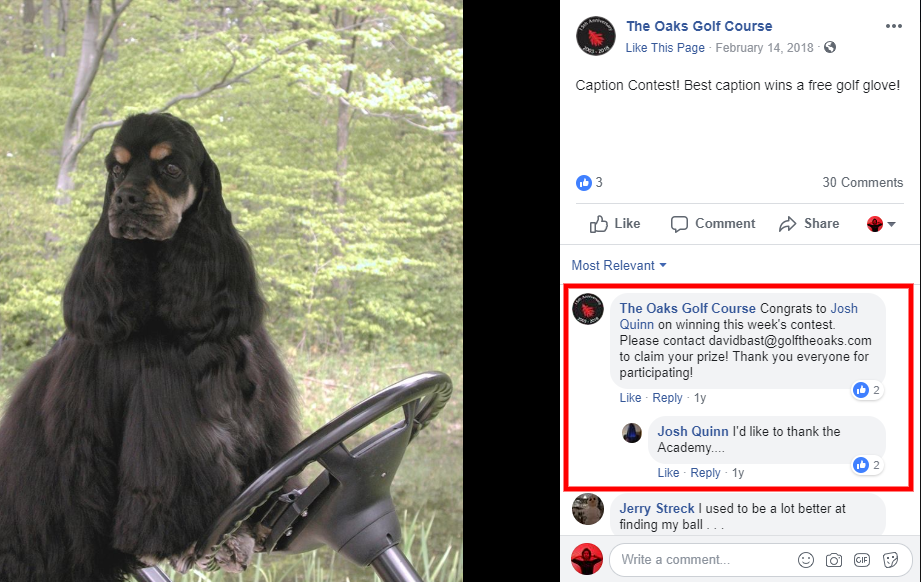 Now that you’re ready to run your Facebook caption contest, here are the best practices for follow-up:

Doing this allows you to step back and make notes about what went well and what didn’t, so you don’t repeat the same mistakes. From there you can make improvements to master all your Facebook caption contests.

Thinking about running a caption contest? Feel free to comment below and tell me about it, I’d love to hear!

Victoria is a Marketing Generalist at Wishpond specializing in all things digital marketing and social media marketing. In love with blogging and Taco Tuesdays. Follow her on Twitter @vicknwsbest.