Decluttering is a big topic in today’s world. Whether it’s your thoughts or your belongings - minimal living is making a comeback like no other. In a world where everyone wants to start living a simple life, Marie Kondo has emerged as the face of making people’s lives easier and happier than ever before.

Founder of the ‘KonMari’ method where she encourages people to let go of anything that doesn’t spark joy, the professional tidier has created a million-dollar empire for herself.

Interested to find out how one can turn tidying apartments and neatly folding T-shirts into a million-dollar empire? We’ll how Marie Kondo’s passion for tidying up turned her into a global brand.

Tidying homes isn’t a regular way to become a global celebrity. So how did Marie Kondo achieve this?

Marie Kondo started off at a pretty young age. When she was a child, she would often be the first person to volunteer for things like cleaning up and organizing. This is where her passion for decluttering began. She started falling in love with the feeling that came after a successful cleaning-up session and she wanted to help others feel the same way - which is why she decided to turn her passion into a business model.

She first started off by working as a professional tidier for her own friends at the age of 19. Slowly, the word spread when people realized just how good she was at her job. Soon enough, she had a long waitlist of people wanting to get their homes organized by her.

Within a few months, she became a celebrity all over Japan. This prompted her to pursue this career full time and she ended up opening her very own organizing consultancy for people all over the country. Her method of tidying up and organizing was a huge hit in Japan where people lived in smaller homes and needed to be a little more efficient with all the space they had. And of course, that’s where Kondo’s incredible skills came in. 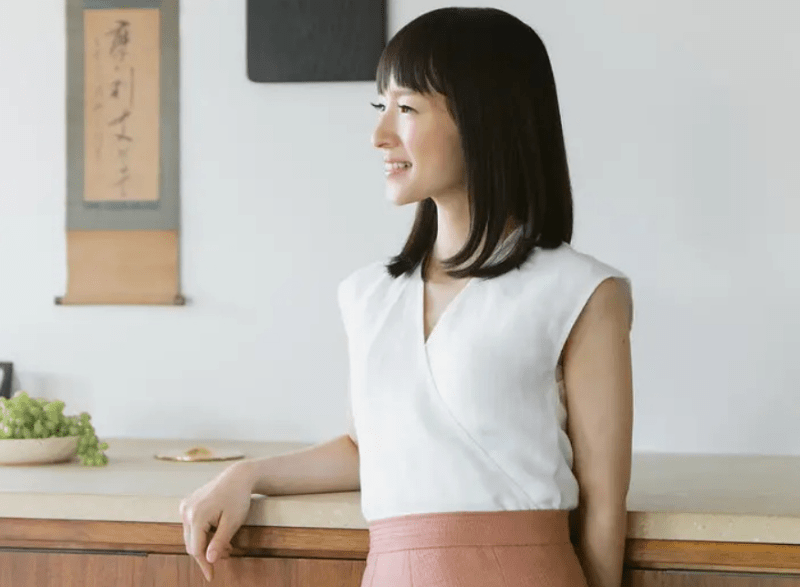 How the Marie Kondo Brand Was Built

As her tidying business grew, Marie Kondo gradually turned it into a global brand. Here are the different ways that Kondo managed to build up her brand, her global popularity, and her fortune.

Marie Kondo’s success started with her writing a book. Her first book titled ‘The Life-Changing Magic of Tidying Up’, was published in Japanese and was a huge hit in the country. The book became a No. 1 New York Times best-seller, moving 8 million copies with tons of people posting videos on social media platforms, showing how Marie Kondo had helped them declutter their homes and workspace. The book has been translated and published in over 30 countries.

She continued releasing more books to expand on her organizational methods. Together, all of her four titles have sold over 11 million copies in 40 countries.

Marie kondo developed her business further through her consultancy website. She started offering training sessions for people who were interested in becoming KonMari consultants all over the world. These consultants were personally trained by Kondo herself.

After months of seminars, lectures, and exams, these consultants are officially certified to go ahead and help others spark joy in their homes with the KonMari method.

Naturally, all the books and all the TV appearances led to this powerhouse of tidying up landing her own show on Netflix which started airing in 2019. The show was called ‘Tidying Up With Marie Kondo’ where she connected with families that needed help decluttering and helped them organize their homes the KonMari way.

The show put Marie Kondo on the mainstream radar with people finding the show hilariously wholesome and fascinating at the same time. In fact, in 2019, her fame got to the point where Marie Kondo was actually invited to attend the Oscars! Pretty cool for someone who cleans up for a living, right? And while Kondo hasn’t revealed exactly how much she has made from the show, it’s rumored that the show is being renewed for a second season.

Marie Kondo’s online empire includes a popular shop, which is filled with items that Kondo herself likes to use every day. Her products cover all kinds of household items, from watering cans to beehouses.

In 2019, she released a capsule collection of leather bento-box-inspired cases with Cuyana, and recently, she also started offering $89 storage sets on her website, which have since sold out - and predictably so. But even with her online store, she encourages people to buy absolutely what they need and limit their purchases only to things that spark joy. 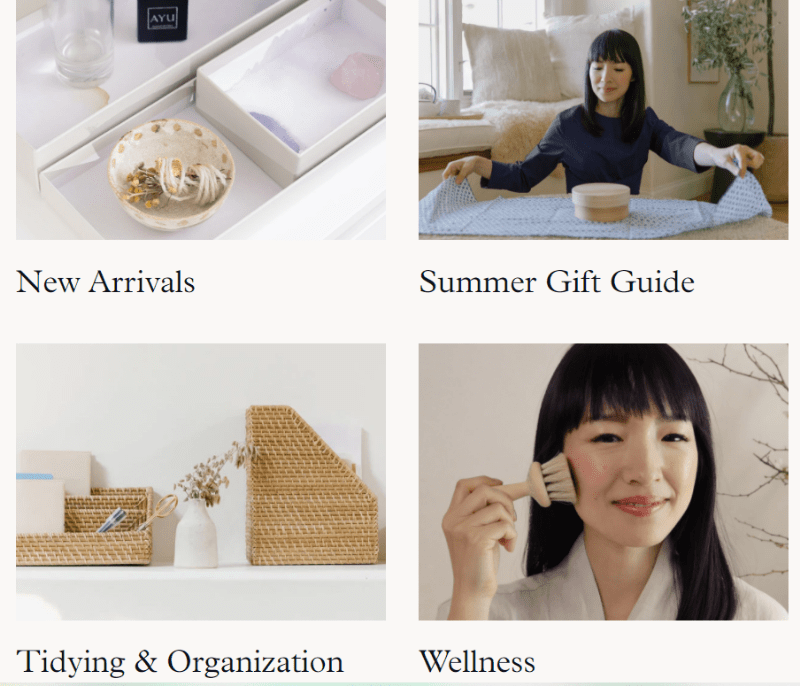 Right after her book became a bestseller, Marie Kondo started receiving tons of requests for TV appearances. She even developed her own video series, teaching her viewers tips and tricks from the KonMari method.

She soon became a celebrity all over the world and by 2015, she was featured in magazines like ‘The Wall Street Journal’, ‘Vogue’ and to top it all off, the same year she went on to earn a spot in TIME’s list of ‘100 most influential people in 2015’.

Kondo featured on segments in the Ellen Show and Good Morning America, where she left people stunned with the kind of tips and tricks she had to offer. With Kondo, cleaning up felt and looked like it was magic.

Marie Kondo offers a 10 part course from her website, teaching people the fundamentals of tidying up. The course includes things like folding methods, checklists, and a KonMari 101 video. 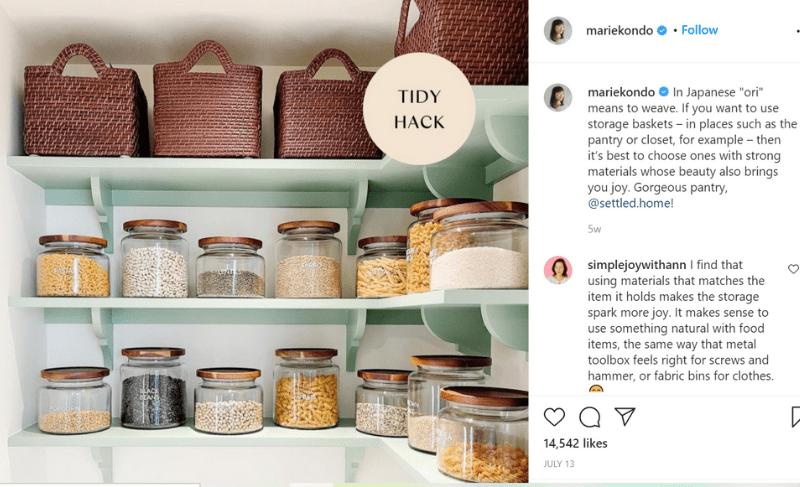 What is the KonMari Method?

So, what exactly is the KonMari method? Well, Kondo was inspired by the Shinto religion, which emphasizes rituals and tidying up spaces as spiritual practices. This is how she treats the process of tidying up as well.

The KonMari method places importance on quality rather than quantity. The core of her approach is understanding the things that make us happy or ‘spark joy’ and if they don’t, we respectfully eliminate them from our lives. More than just tossing out stuff, Kondo asks declutterers to thank objects for their service before throwing them away. 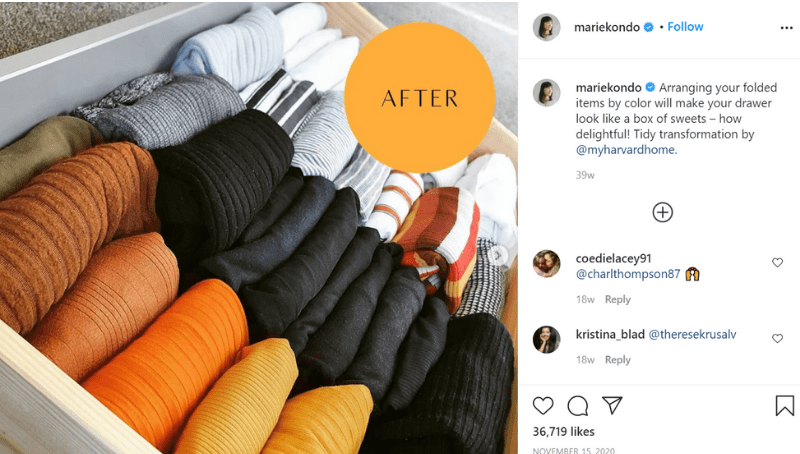 How Marie Kondo Turned Tidying Into Something Far Greater

Her fans, who call themselves ‘Konverts’ have described the KonMari method as a meditative practice where they reflect on their possessions and ask themselves what it is in life that truly makes them happy. Whether it’s feelings or possessions, Marie Kondo encourages people to let go of anything that does not incite a positive feeling.

This means Marie Kondo offers her fans so much more than just an approach to cleaning up. Sure, her various tidying hacks are super helpful, but her whole philosophy offers more than that. Marie Kondo teaches people how to find happiness through simplicity.

This is achieved through her practices like giving thanks to objects before you get rid of them, or making sure that everything you own has a joyful purpose. Marie Kondo is so much more than a tidying expert - she’s helped people to discover a new source of happiness and fulfillment in their overly cluttered lives.

How Much is Marie Kondo Worth?

As of 2021, Marie Kondo’s net worth is around $8 million. Which is a huge milestone for someone who started their business at the age of just 19.

Ever since her brush with fame, Kondo has moved to LA with her family where she runs her million-dollar empire, occasionally flying out to different countries to help people organize their homes. In addition to her latest Netflix series, the organizer has also successfully released her fourth book titled ‘The Life-Changing Method of Tidying Up’ where she teaches her readers a room-by-room approach to letting go of the clutter in their lives.

Kondo also regularly writes about her method on her website's blog to really connect with her audience in every way possible. She’s got authored numerous books, spoken at major events, starred in an international series, and become a household name. Pretty impressive for someone who could hardly speak a word of English when she started her career.

Considering all of this, it really looks like Marie Kondo is only getting started. She has single-handedly stirred up the home organization market - most of which is dominated by her practices and methods. And if things keep progressing the same way, it’s safe to expect that Marie Kondo will remain the face of organization and joy for a long time to come.