How The Rock Created a Record Selling Tequila Brand

With his premium alcohol brand ‘Teremana’ the actor and former wrestler Dwayne ‘The Rock’ Johnson continues his streak of success in the world of entrepreneurship. Record-breaking sales in the first year look astonishing when compared to other brands like George Clooney’s founded Casamigos Tequila.

So, how did the Rock manage to set a new record selling tequila? Let’s find out!

A Quick Background On The Rock

For those of you who don’t know, Dwayne Johnson comes from a family of professional wrestlers. During his stint with the WWE, The Rock was a great entertainer and a great fighter. He quickly started winning championships and climbed the top of the wrestling hierarchy in no time.

He made his Hollywood debut in 2002 with the film ‘Scorpion King’ and eventually became one of the world’s highest-paid actors, starring in successful franchises like ‘Fast and Furious,’ making millions of dollars per film.

At the same time, his continued success earned The Rock tons of brand deals with companies like Under Armour – adding to his already massive net worth of over $400 million. 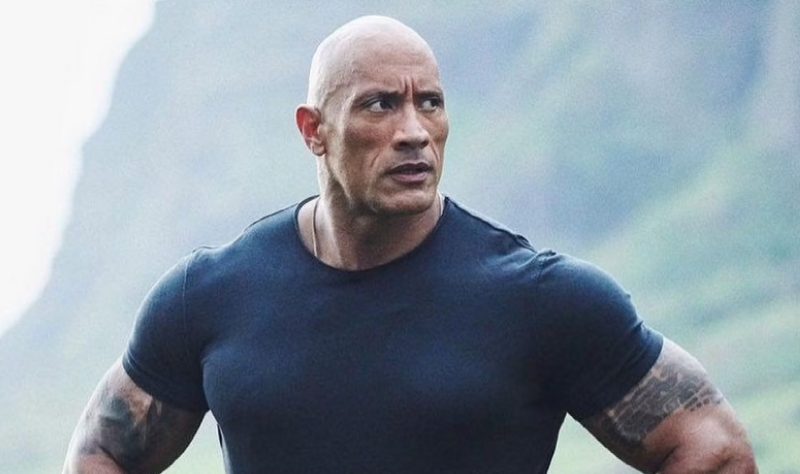 Why The Rock Started a Tequila Business

Considering all the success he has seen in the entertainment industry, it was a little unexpected when The Rock entered the tequila industry with the launch of Teremana in March 2020.

According to the man himself, he went into the liquor business because he has been a huge fan of tequila for a very long time. So, the idea of starting his very own liquor brand was always there in his head. In fact, he had been thinking of it for the past 10 years but just never seemed to find the right time.

As far as the brand’s name goes, it pays homage to The Rock’s Polynesian roots where the word ‘tere’ means The Earth and the word ‘mana’ means spirit. So, Teremana loosely translates to the Spirit of the Earth.

The former wrestler partnered up with his friends Dany Garcia, Jenna Fagnan, and Ken Austin, who are now listed as co-founders of ‘Teremana Tequila.’ With their help, The Rock decided to capitalize on his legacy as a sportsman and actor to turn Teremana into a luxury brand name. The Rock and his team worked with a Mexican family-owned distillery to establish the brand’s very own distillery, where local artisans create small batches of his premium drinks.

Not only does the Rock endorse his tequila, but he also makes sure that he involves himself in every step of the brewing process, overseeing every small decision, from the flavoring to the distribution and even the marketing. 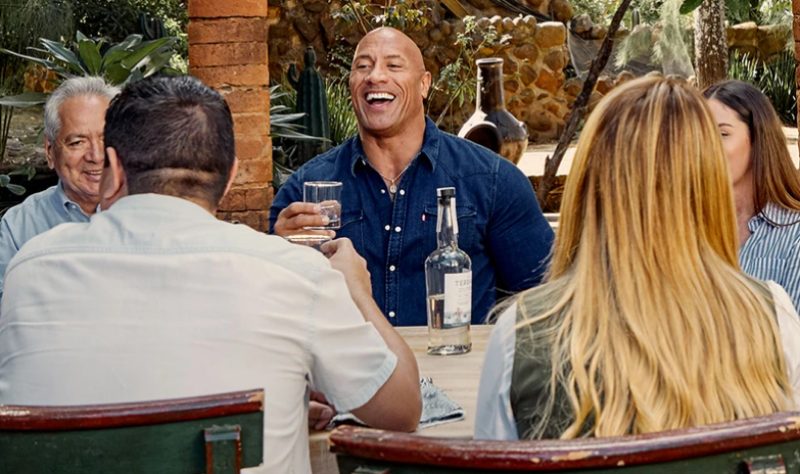 How Big is The Rock’s Tequila Company?

When the drinks were launched in March 2020, Teremana broke the record for having the biggest launch in the spirits business history, selling 300,000 cases and shipping around 400,000 cases all over the USA. According to The Rock himself, he was a little unsure when he set out to launch his brand. But, with the kind of sales that Teremana experienced a few hours within the launch, he knew that he had hit the jackpot.

Recently, The Rock signed a major deal with the Mast-Jägermeister organization to globally distribute his Tequila. This partnership has proven to be extremely successful considering the fact that Teremana has already seen massive success in the US.

Soon, the company plans to launch its products in the European and Asian markets as well. In fact, according to Jenna Fangon, Teremana is all set to become a million-case brand in the coming few months, making it one out of six tequila brands in the whole world to sell one million cases to retailers and customers. 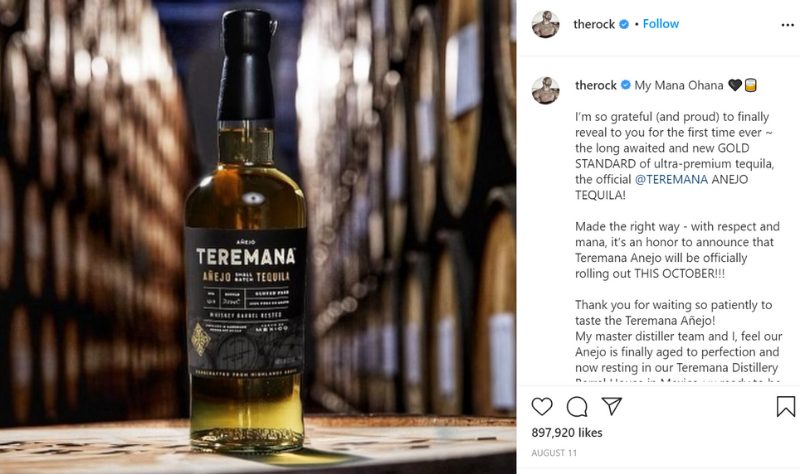 How Did The Rock’s Tequila Become So Successful?

The great thing about Teremana Tequila is that you end up with a high-quality product at the most affordable price – which is what The Rock’s vision with the brand was. Currently, the brand sells two varieties: The Blanco, retailing for $30, and the barrel-rested Reposado, which costs $33, making both the drinks pretty easy on the pocket. In fact, Teremana is the most affordable celebrity-endorsed tequila to have ever hit the market.

When Teremana was launched officially, the brand had no trouble dominating the market. To promote his drinks, The Rock used his influence and partnered up with brands like ‘Salt and Straw’ to release limited edition Teremana Tequila flavored ice-creams for the Holiday season. He even ended up sending a 100-year old fan a few bottles of his brand new drinks – adding on to the hype. He also regularly shares Teremana-related content to his 270 million followers on Instagram with the hashtag #teremanatuesday.

And while launching the brand during a period where the entire world was locked inside their homes caused a few issues initially, this period saw a 34.1% rise in liquor sales, making the timing of his entry into the liquor industry perfect. The resulting sale of 300,000 cases means that the Rocks Teremana Tequila is currently the most profitable tequila brand owned by an A-list celebrity – all of that in just one year!

But, as successful as the launch was, the company had to deal with some initial hiccups right in its very first stage.

Because of all the hype around their products, Teremana had to keep up with the constantly rising demands. This means that they were always running out of products and people just kept wanting more – and for a new business, all of this was a little hard to manage logistically.

To make sure that they managed to retain their brand loyalty while providing their customers a high-quality experience, the brand had to immediately switch their production into high-gear while also making sure that their ‘small batch’ and handmade method was still in place.

As far as the future goes, the company is set to expand itself not just in terms of locations and shipments but also in terms of product variety.

The Teremana Añejo is all set to be the third drink that The Rock has played a part in creating, using the same sustainable, hand-made brewing process. With the company ramping up production as rapidly as they can, there’s no doubt that this year is definitely ending on a high note for Teremana.

With Teremana, The Rock has managed to create not just a brand, but a luxury drinking experience at a mid-range price point for his customers. 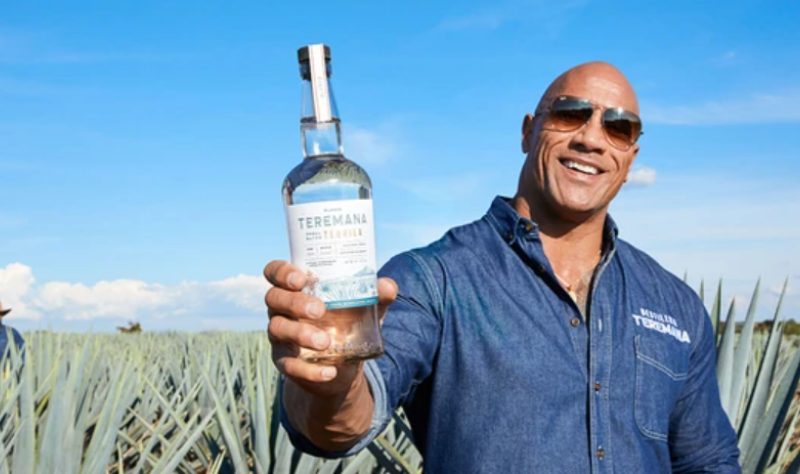 The Rock is not just a Hollywood star, he’s also an excellent businessman. Even though selling tequila is far away from his roots, he still managed to break a record with his sales. Maybe this was because of his personal brand, the quality of his product, or the timing of the market.

Whatever the case, The Rock has shown us that he can do a lot more than just wrestle and act! If you’re interested in watching big businesses grow, then Teremana is certainly a company to watch.