Building the $1B Dating App - Bumble Business Model and Story

What do you get when you combine strong personal values with a unique business idea? In the case of Whitney Wolfe Herd, you get a publicly-listed company that disrupted the dating industry and made her into the youngest self-made female billionaire.

Bumble's unique business model and leading technology makes it one of the most valuable players in the online dating world. Bumble also has a really interesting story.

In this guide, we’ll uncover how Wolfe Herd went from selling tote bags to support a good cause, to building Bumble - the biggest women-centric dating app on the market.

Let’s break down this startup story and understand how it became so successful.

Bumble is a dating app aimed at empowering females. The app has a business model that gives women the power to initiate conversation or end matches. This differs from other popular dating apps that face all kinds of challenges around women and harassment.

Bumble was founded by Whitney Wold Herd who acts as the CEO. Bumble is the second biggest dating app in the market, behind Tinder.

Bumble is a unique tech business, and it took dating apps to a whole new level. The business was started by Whitney Wolfe Herd in 2014. To understand the Bumble business idea, we’ve got to look at Wolfe Herd’s journey as an entrepreneur.

Whitney Wolf Herd's unique approach to business combined an entrepreneurial spirit with her personal values. This approach made its first appearance while she was attending college when the devastating BP oil spill in 2010 drove her into action.

She started a business, in partnership with celebrity stylist Patrick Aufdenkamp, called the Help Us Project, selling bamboo tote bags to benefit areas most affected by the damage. While the bags gained local success initially, once celebrities like Nicole Richie and Rachel Zoe were photographed with her bags that they received a great deal of attention and press.

Wolfe Herd’s desire to create a business continued and motivated her to join the startup incubator Hatch Labs in 2012. Her initial project, created with Sean Rad, was called Cardify. This was a platform that aimed to help retailers reward customers with loyalty solutions.

While Cardify didn’t take off, Rad had been working on a prototype of Tinder, then called MatchBox. Along with Wolfe Herd, who reportedly came up with the app’s final name, as well as co-founders Justin Mateen and Jonathan Badeen, the app launched in September 2012. Wolfe Herd become the VP of Marketing - not bad for a 22-year-old.

Unfortunately, after her relationship with Mateen ended, the environment at Tinder became toxic for Wolfe Herd. She left the app in April of 2014 and sued it for sexual harassment. She eventually settled this case, winning $1 Million and stocks as part of the agreement.

As a result of filing the suit, Wolfe Herd was ostracized by the tech community and became the subject of online hate. It got so bad she deleted her Twitter account. This experience inspired her next project, a female-only social network, attempting to gain attention from compliments instead of controversy, called Merci.

While still conceptualizing Merci, Badoo founder Andrey Andreev contacted Wolf Herd, hoping to bring her on as CMO of his company. While she didn’t want to take the job, Andreev believed in Wolf Herd’s idea for a woman-centric social brand, and he convinced her to start in the area both of them knew best: online dating. This is how Bumble was created.

The two formed a partnership where Andreev would receive 79% ownership in the company following an initial investment of $10 million along with additional investments and Wolfe Herd would serve as founder, CEO, and 20% owner, with autonomy over the company. And so Bumble was born.

“If we were going to build the female internet and focus on socializing, let’s go in and disrupt dating first. He promised me if we reached a certain number of users that I could expand into friend-finding and networking.” 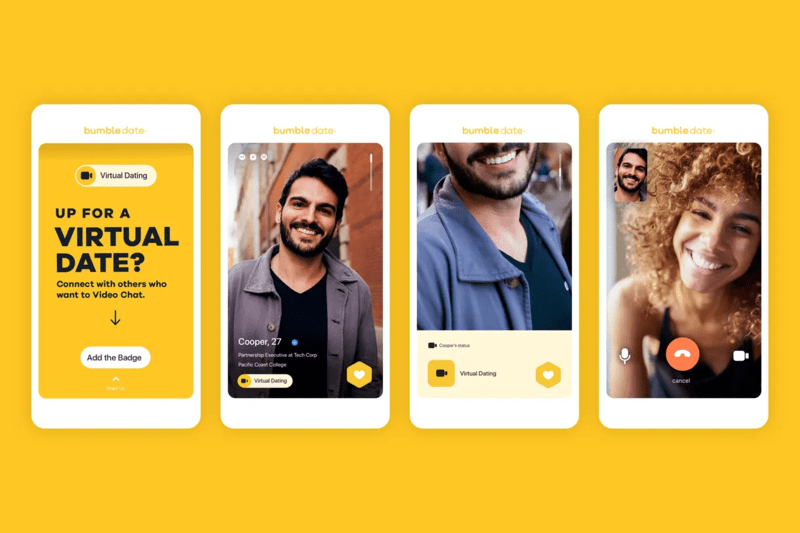 Bumble looks and feels like other dating apps. Users swipe each other until there is a mutual like. At this point, they get a match and can connect with each other via chat. While this seems like all other dating apps, the difference is that only women can make the first move.

Women have the power on Bumble, and they don’t want to connect with their match, the match expires after 24 hours.

The goal of this is to remove sexual misconduct and gender discrimination from dating apps. Bumble empowers women and works towards changing the traditional stigmas of dating.

What Made Bumble Unique?

Bumble stands out in a sea of dating apps because the central focus is on women initiating the conversation with prospective partners. No more harassment or never-ending messages from strangers, but a simple idea that the woman can make a match and reach out when SHE wants.

But Wolfe Herd had bigger goals and dreams for Bumble. She saw it not just as a dating app, but as a "preeminent global women's brand" and a place to meet new people "no matter who you might be looking for, whichever life stage or relationship you're in."

The Bumble business model branched out into other platforms after the initial dating site launch. This includes Bumble BFF and Bumble Bizz.

In 2016 they launched Bumble BFF, which is friendship and community-driven. It follows the same basic idea as the dating site, except it’s just about finding friendship.

As with the dating app, for both BFF and Bizz, they employed their model of only allowing women to make the first move, bolstering their mission of empowering women in all types of interactions. 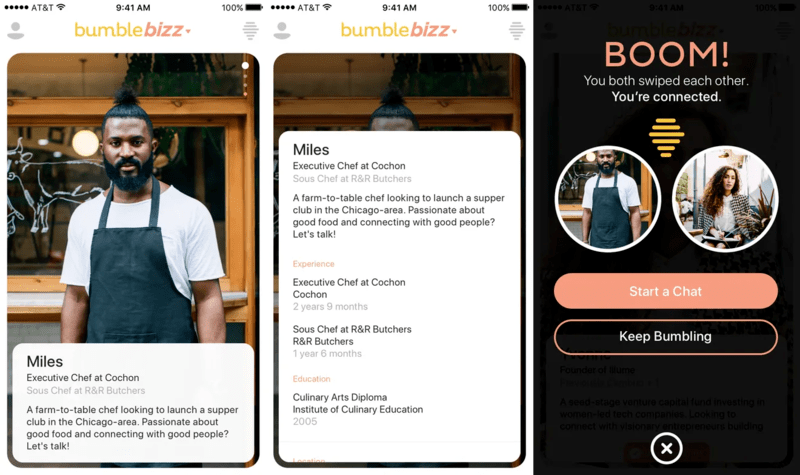 One of the biggest factors of Bumble’s success is how value-driven the business is. These values play a core role in the Bumble business model.

Wolfe Herd’s values shine through in Bumble, which is vocally committed to its core values of promoting “accountability, equality, and kindness in an effort to end misogyny and re-write archaic gender roles,” with a focus on empowering women and the LGBTQI+ community.

This is evident by actions such as sharing “An Open Letter To Connor” which publicly called out a male user who was abusive to a female user. There was the time when Wolfe Herd convinced the House Criminal Jurisprudence Committee of Texas to make unsolicited nude pictures a crime. Bumble also showed huge vocal support of the Black Lives Matter Movement in 2020.

In 2019, Bumble also showed how it deals with internal issues when its sister company Badoo made headlines for “sleazy” office culture and misogyny. Wolfe Herd stated that while her experience with the company and Andreev had always been positive, she would follow the investigation and support any person that wants to confide in her. 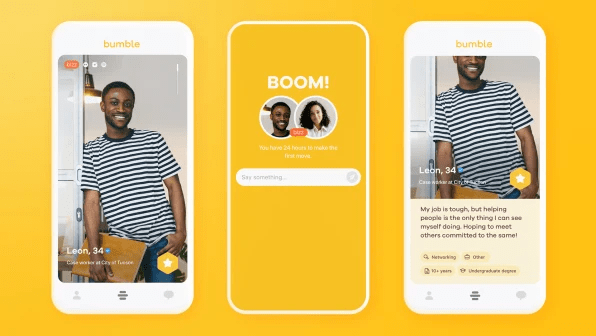 During this buyout, Andreev, gave up his entire stake in both Bumble and Badoo, leaving Wolfe Herd as CEO of MagicLab and with 19% of the company, valued at $3 billion.

How Big is Bumble?

Focusing on its unique selling proposition and being vocal about its values has allowed Bumble to grow into the 2nd largest online dating app in just 7 years.

Having gained 1 million users in its first year, Bumble’s user base grew to 8 million in 2016 and increased by another 4 million users the following year.

During this same period, Bumble’s share of the dating app market grew by 9%, according to Sensor Tower. Bumble now sits at 19% market share, coming in second only to Tinder.

But just because an app is popular doesn’t mean it’s necessarily profitable. As of February Bumble is $900 million in debt.

How Does Bumble Make Money?

The company relies on its freemium model, which allows users to purchase subscriptions that unlock special features. These include the ability to extend time on matches, unlimited swipes, the ability to backtrack, SuperSwipes, and more. The app currently has 2.8 million paying users worldwide spending an average of $19.99.

Bumble makes money through two add-on features. These are:

While most online businesses make their money from advertising, it was reported that only 3% of Bumble’s total revenue in 2019 came from this revenue stream. This makes the Bumble business model quite unique.

The value of sticking to your personal beliefs was shown when Bumble became publicly traded in February 2021.

The dating app opened at $43 per share, with its stock soaring to $76, causing a valuation of $13 Billion before hitting a high of $84.60 per share, less than a week after its debut.

How Much is Bumble Worth?

After Bumble went public, the company gained a valuation of $13 billion. This has seen uptrends and downtrends, but the valuation has stayed roughly the same.

After Bumble went public, 31-year-old Wolf Herd gained a net worth of $1.3 billion. This made her both the youngest self-made female billionaire and the youngest woman to take a company public. Very impressive for a person who started out selling tote bags for charity.

Overseeing such growth at such a young age has led Wolf Herd to gain recognition for her efforts, with Business Insider including her in their list of 30 Most Important Women Under 30 In Tech in 2014. She was also named one of Elle magazine’s women in tech in 2016 and appeared on Forbes’ “30 Under 30” list in 2017 and 2018. 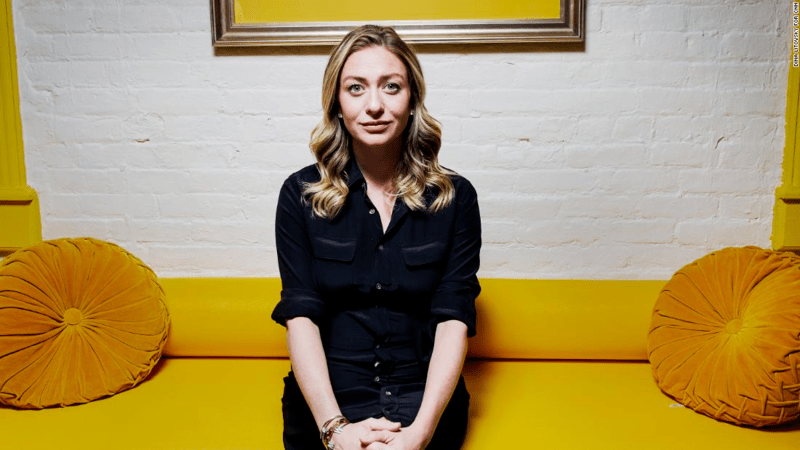 Whitney Wolf Herd has managed to turn Bumble into a dominant player in the online dating space. She did this by channeling her experiences, both positive and negative, from her time at Tinder, while identifying the need for women to be empowered. By focusing on the needs of women, she has been able to create a platform where its users can feel safe while engaging with strangers - a rarity on the internet.

She's the youngest woman to have taken a company public, and the youngest self-made female billionaire. Wolf Herd is the perfect example of how a combination of sticking to one’s values and focusing on a unique value proposition of empowering women can create a business that disrupts an industry while pushing for social change.