Gymshark co-founder Ben Francis took his fitness apparel company from his parent’s garage into a billion-dollar company in only 10 years.

Gymshark pioneered influencer marketing and harnessed the power of social media. This global brand has been dubbed “the UK’s answer to Nike”, and it was all started by a pizza delivery boy.

So how did Ben Francis get Gymshark off the ground? And what steps did he take to build it into one of the UK’s fastest-growing companies?

We’ll break down Gymshark below to find out how the business started, where Gymshark’s early growth came from, and what the future holds for this brand.

How Did Gymshark Start?

Gymshark was founded by Ben Francis and his school friend Lewis Morgan in 2012. At the time, both were 20-year-old university students.

To support themselves, they worked part-time after school. Ben Francis was a delivery driver for Pizza Hut. Lewis Morgan was a retail assistant at a menswear store and a pot washer at a local hotel.

Francis was obsessed with fitness and going to the gym. He had launched a few fitness apps and websites by this time, but he wanted to take the next step and sell actual products online.

Fitness supplements seemed like the obvious choice, but he couldn’t afford the minimum orders with his Pizza Hut paycheck.

So, he came up with a different plan.

Launching Gymshark as a Dropshipping Business

Because of his financial limitations, Francis decided to start selling fitness apparel through dropshipping.

At the time, dropshipping was a creative solution that wasn’t very common. It meant he didn’t have to buy stock and risk his own cash running his business.

So, he created a website, launched Gymshark, and got to work.

After a few months of dropshipping, Francis bought a screen printer and sewing machine with the help of his brothers and friends. This was to solve their problem of not finding fitness clothes that made sense for their body types.

They were looking for something streamlined and tapered, but all that was available was large, boxy, and baggy.

So, Francis began designing his own range of fitness apparel. Francis developed his ideas by hand at his parents’ house.

He had learned how to sew from his grandmother and started to make gym vests and t-shirts in his parents’ garage. He recalls this as a time-consuming but enjoyable period in the company’s life. 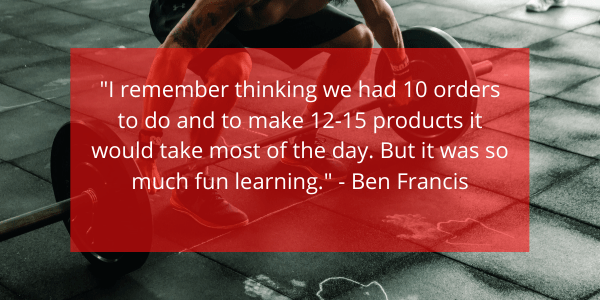 Gymshark made about £500 in sales per day during this first year.

Around this time, Francis visited the Bodypower expo. After attending, he knew that if he wanted Gymshark to be known in the fitness industry, he’d have to exhibit there. Based on this gut feeling, he booked a spot for Gymshark for the next expo.

In the year leading up to the expo, Francis would see Gymshark grow big enough to place his first order from a manufacturer. He also saved enough money to upgrade his space at the expo and bring YouTube fitness athletes along with them.

The expo was filled with supplement brands, with bodybuilders signing autographs at the back of their stands.

Gymshark, on the other hand, launched its Luxe tracksuit. It also had an open stand where anyone could stop by and have a casual conversation with its’ athletes. While having YouTube influencers at your stand makes total sense now, at the time, this was brand new.

The following three days saw Francis and his team selling out all the stock they’d brought along.

They also got to know their customers, helping establish the Gymshark community. When he got home from the expo, Francis decided to turn the store back on, sharing on Facebook that it was live again.

Orders started flooding in, and within 30 minutes, they’d sold out of everything. This was more than they’d sold in their entire history. At this moment, Francis knew he’d created something special. 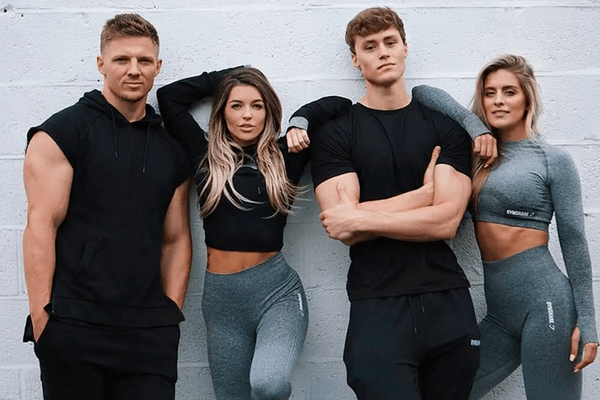 To help the company grow even further, Ben Francis and Lewis Morgan spent all their time focused on making Gymshark a success.

In 2015, just three years after founding the company, Gymshark made £9 million in sales. The following year, the company was named the UK’s fastest-growing company.

How Gymshark Became a Billion-Dollar Business

Gymshark’s rapid growth was due in part to its early adoption of influencer marketing.

The company sent free products to prominent bodybuilders and fitness influencers. These included Lex Griffin and Nikki Blackketter. By 2020 it had 125 influencers on its payroll.

It also focused on making its social media channels interesting. This helped it reach 5.6 million followers on Instagram and almost 2 million on Facebook. 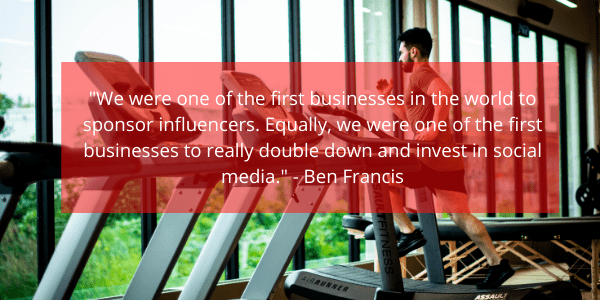 Another reason is that Gymshark is an online-only, direct-to-consumer brand. This means it can easily react to changes in the market and doesn’t have to deal with expensive retail store costs.

How Gymshark Became a Global Brand

Morgan left the company in 2016 to focus on his property development company and fashion label. He still retained a 21% stake in the company.

A year later, Francis was replaced as CEO by Reebok’s former head of sales in Europe, Steve Hewitt. Under his leadership, the company was able to crack £100 million in sales the following year.

Finally, in 2020 US private equity firm General Atlantic bought Morgan’s 21% stake in the company for about £200 million. This valued the company at over £1 billion.

Since then, Gymshark has continued to grow. This is thanks in part to the pandemic, which saw more people running, cycling, and exercising at home during the lockdown.

Gymshark is now available in 230 countries via its 14 online stores, and it employs over 900 people, with offices in five regions.

All this has helped Gymshark’s turnover grow to £400 million in 2021, a tenfold increase over the last four years.

Although the latest profit numbers aren’t available, for the year ended 2020 they increased to over £24 million, up from just under £15 million in 2019. By comparison, Nike reported a net income of $5.7 billion for the year.

These three lessons had a big impact on Gymshark and Francis, who returned to the CEO role after gaining experience from different senior positions. These include chief technology officer, chief marketing officer, and chief product officer.

What’s Next for Gymshark?

And while Francis had held talks with banks and investors about a possible IPO, he says he’s not planning on taking Gymshark public anytime soon.

Instead, Gymshark’s focusing on expanding in the United States, having recently opened an office in Colorado. It’s also added US entrepreneur Gary Vaynerchuk as an advisor to its board to assist with marketing and brand development in North America. 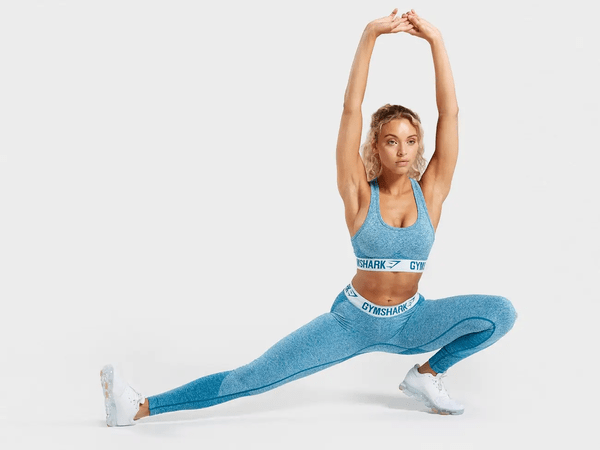 3 Lessons We Can Learn From Gymshark

Francis started Gymshark without any money and ended up creating one of the world’s biggest gym apparel and accessories brands.

Instead of trying to fast-track his success, Francis began manufacturing clothes with his very own hands in his family home. Fast forward a few years, and Lewis and Francis built one of the fastest-growing businesses in the UK.

Here are three important lessons we can take from this story:

Gymshark emerged at the right time to take advantage of the rise in popularity of direct-to-consumer online stores. From a pizza delivery boy’s idea to combine his passion for fitness with online retail, to a pivot into athletic wear because he couldn’t find the styles he wanted to wear himself, this brand’s story is certainly inspiring.

Gymshark was also an early pioneer in influencer marketing and used its social media channels to the fullest. Now they’re a billion-dollar brand.

So if you’re busy sewing clothes in your parents’ house, you still have the chance to take over the world of retail! Just stick to the three lessons we’ve learned from the Gymshark founders.