If you want to engage and interact with current and prospective leads, a promotion is the solution you’ve been looking for.

We’ll admit it, we’re a little biased when it comes to promotions as they’re our bread and butter.

But we’re not lying about the effects they can have on your business.

Social media and website promotions are the perfect way to generate hype around your business, interact with new and existing customers, and build your list.

But as I explained in my article “ The 5 Most Heart Wrenching Contest Mistakes We See All the Time” not every promotion runs as planned.

What it is: A sweepstakes is the best type of promotion to run when you’re just starting out in the promotion world. It involves participants simply entering their information on a form for a chance at winning a prize. It requires little effort from entrants and builds your fan base easily.

We love this promotion because it is targeted directly at AirFrance’s audience, uses a prize relevant to their brand (creating loyalty for the future), and engages participants by involving a creative element (the 1000 word description).

This promotion ended with over 14,600 entrants and a 41% conversion rate. Not too shabby! What it is: A vote promotion requires entrants to vote for an image or idea displayed by your business. It gets leads interacting with your various products and voting for their favorite, giving you insights into what your potential and current customers want or need.

This vote promotion from Mark’s Work Wearhouse is the perfect example. It required participants to vote on which Mark’s product they would want for Christmas this year in order to be entered to win a $400 gift card.

The gift card prize encourages future purchasing, while the product display allows Mark’s to show off their products and get customers thinking about which ones they want. This type of promotion can lead to participants eventually purchasing the items they selected even when they don’t win the prize. It also gives Mark’s valuable customer insight into which products they may want to stock up on going into the Christmas season. 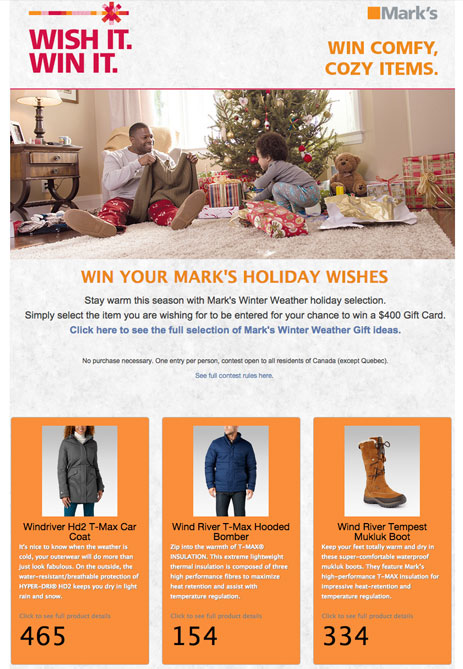 What it is: A photo promotion involves participants submitting a photo relating to a specific theme. It gives your business the opportunity to gain information from entrants as well as user-generated content which you can use down the line as marketing and social media ammunition. It’s a great way to get current and potential customers engaging directly with your brand and your industry.

As a snowboard and mountain sport fan I can’t help but love the Sport Chek photo promotion example below. First off, the prize is something you can’t buy. They’ve given participants the chance at a once-in-a-lifetime opportunity that’s also relevant to the brand. Imagine HeliSkiing on a Burton board you built yourself in the Burton factory, pretty damn cool.

They also have supplied secondary prizes which is a great idea to encourage submission. A photo promotion is more effort than something like a sweepstakes, but for a prize of this value a photo submission is not a ton of effort.

The promotion got over 800 submissions while also generating a lot of positive word of mouth around the Sport Chek brand. A homerun in our books! 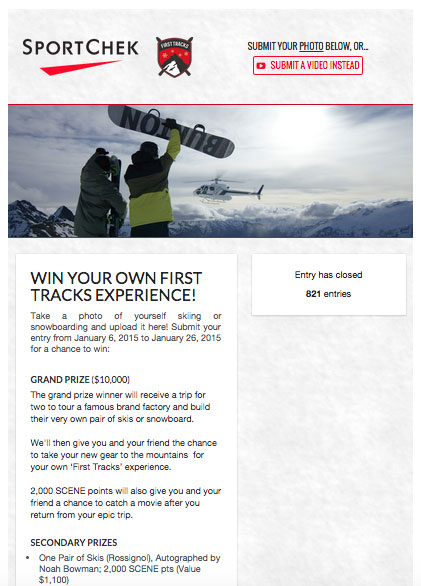 With a photo promotion you also have the option to activate a voting feature. This allows entrants to upload their photo and have it voted on by their friends and family, expanding the reach of the promotion. If participants’ own networks are not aware of the promotion or brand, the voting option creates more awareness for your business.

An example of a photo promotion with voting can be seen below from CPRail. It required entrants to submit their favorite photo involving a CP Rail train or them at a CP event and then get their networks to vote for their submission to win. 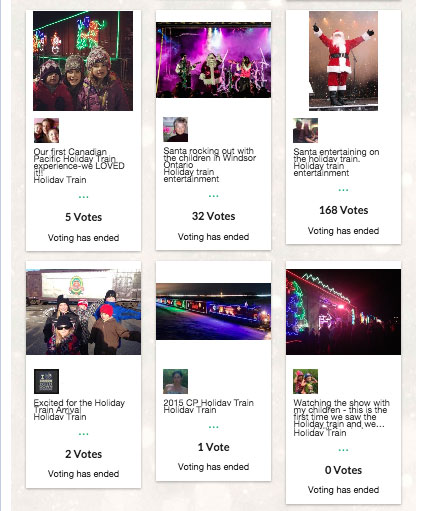 What it is: A referral promotion allows you to grow your brand reach as existing fans sign up to win a reward, but can only be entered once they have referred a certain number of individuals.

When the participant signs up they are given a unique link to share with their friends and family to get them to enter. That URL is then tracked to see how many referrals that individual makes and automatically enters them once they have met their quota. This makes entrants motivated to share the promotion with their own networks, while allowing new groups of people to see your promotion.

This variation of a referral promotion from Coshell Charcoal gets participants to enter to win a July 4th prize pack, while also referring friends and family in order to get more entries and chances to win. While participants get more entries, the company is able to expand the reach of the promotion to new networks of individuals. We love how they have incorporated the holiday theme with a relevant prize, and used the referral feature to create more awareness around the promotion. 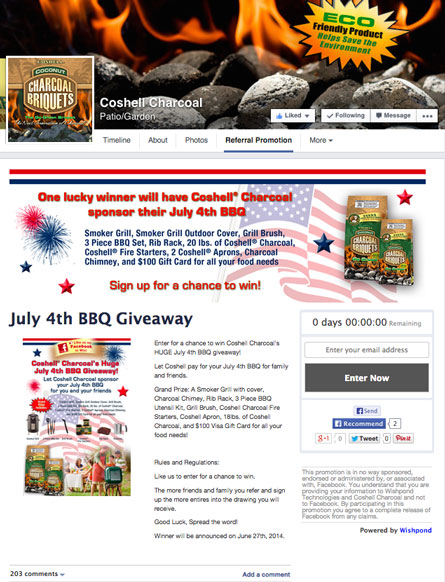 What it is: An essay promotion allows you to require entrants to submit text-entries in relation to a certain topic. It is a great promotion format to engage users and get them communicating and discussing a certain product or idea. With certain providers like WIshpond you can also allow others to vote on their favorite essay submission.

The essay promotion below is one of our favorite examples as people love sharing their recipes with others. It revolves around the Panasonic brand sold at London Drugs and is relevant and valuable to their customers.

It also includes a pasta recipe as another motivator for Fans to share the promotion with their own networks. London Drugs actually tested the recipe submission idea with their Facebook Fans first before launching the promotion (something which is a great strategy to socially prove your promotion concept before going live).

For a promotion requiring this level of effort, getting over 400 entries is definitely a success in our books. It ended up with a 17.93% conversion rate and the brand gained lots of user-generated content while strengthening their relationships with many customers. 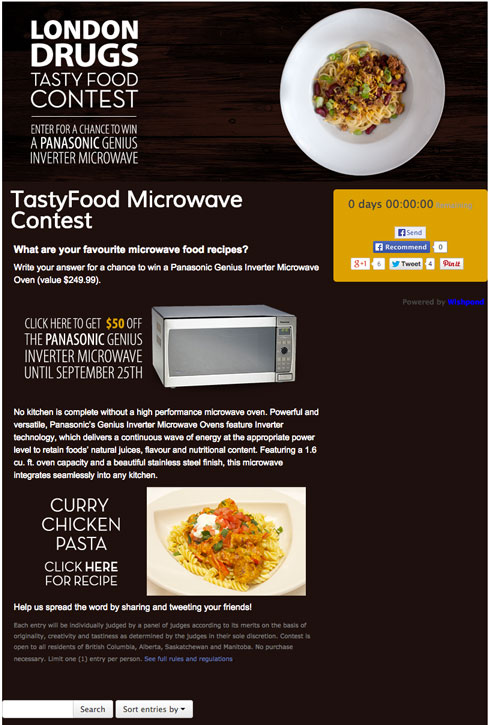 The most successful promotions are those that are creative, unique and intriguing to fans. These are just a few valuable examples to guide your contest experience.

Don’t overcomplicate the process for submission and remember that the more engaged your audience is, the more engaging type of promotion you can run.

Have you run any of the promotion types mentioned above? What was your experience like?