How We Got Featured On The Front Page Of Slideshare

“We just got on the front page of Slideshare!!” shouts my content editor as he peeks his head over a desk divider.

But before our team breaks it down “funky time”, let me rewind a little.

For years we understood the power of Slideshare. We heard about the 70 million active users. How it was awesome for B2B lead generation and reach.

But we hadn’t found a way to really tap into that audience. And while we had published a number of seemingly successful Slideshares in the past, our analytics revealed a more telling tale.

Here’s one of our Slideshares that received over 5,000 views in under a month. 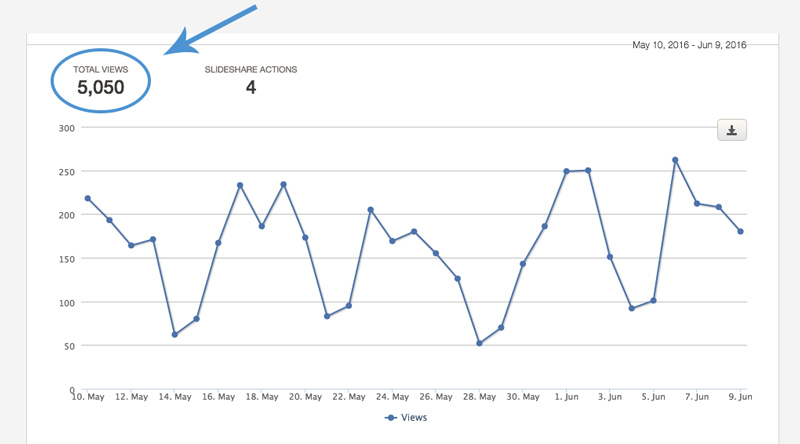 But when you examine the top traffic sources, you see that over 89% of that traffic was coming directly from the article it was embedded on.

Which means that we were getting basically no traffic outside of that one blog post. 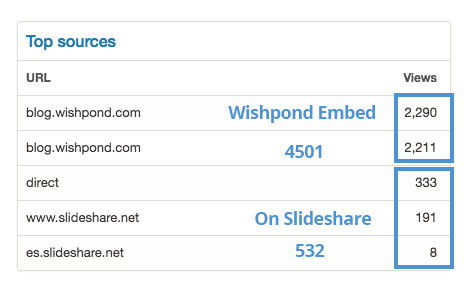 That’s when we decided something had to change. If we were going to continue to produce Slideshares, we had to do something different.

If we were going to continue to invest, we had to make it to the front page in order to capture more organic traffic from Slideshare directly.

In this article I’ll explain the mistakes we made when producing Slideshares in the past, and how we fixed those to increase our organic Slideshare’s clicks and overall exposure.

I’ll also break down the exact tactics we used to get featured on the front page with one particular slidedeck, generating over 90,000 unique impressions to date.

Let’s get into it!

6 Elements of a Successful Slideshare

Since the Slideshares we produced in the past hadn’t gotten the results we wanted, I decided to throw away the book and start from scratch to see what would work.

And based on my research of successfully featured Slideshares, I noticed that they all had 7 things in common:

After taking stock of the commonalities between successful Slideshares, I immediately noticed some key areas where our Slideshares were falling short.

We Failed to Add Context

On many of our previous Slideshares, we failed to give context to why the information we were providing was important.

For instance on our Slideshare 40 Up-to-Date Facebook Facts and Stats, rather than giving any background regarding what the stats mean, we just jump right into the first slide with a statistic.

By jumping into the stats right away, we failed to build a narrative or story leading up to the stats. The effect was a Slideshare that was much less impactful.

Almost all of the most successful Slideshares that I saw managed to incorporate some element of backstory or introductory slides that helped explain why the proceeding slides would be important.

We Tried to Make More Than One Point Per Slide

I also noticed that we would often make more than one point per slide. Often times, since we would be repurposing content from our blog, we would end up with long paragraphs that more closely resembled a blog post than a Slideshare.

Doing this made the content of our Slideshares difficult to read and consume. It also goes against the entire flow of a Slideshare – an easy to understand and clickable experience.

Compare this with slides from more popular Slideshares:

We Weren’t Taking Advantage of the Cover Slide

The cover slide is often the most important slide since it’ll determine whether someone will take the time to view the slides at all.

In some cases we would either quickly throw together a header image, or even leave them bare and without images.

This is not to say that all of our cover slides looked bad, but rather that we weren’t appreciating the full effect of visual content within the psychology of conversion.

Especially when you compare these cover slides to more popular Slideshares, it’s no wonder we weren’t getting the type of results we were looking for.

Once I recognized the core problems with our past Slideshares, I was able to make adjustments to ensure that our next Slideshare would be a success.

And that began by creating a good quality, visually engaging cover photo. 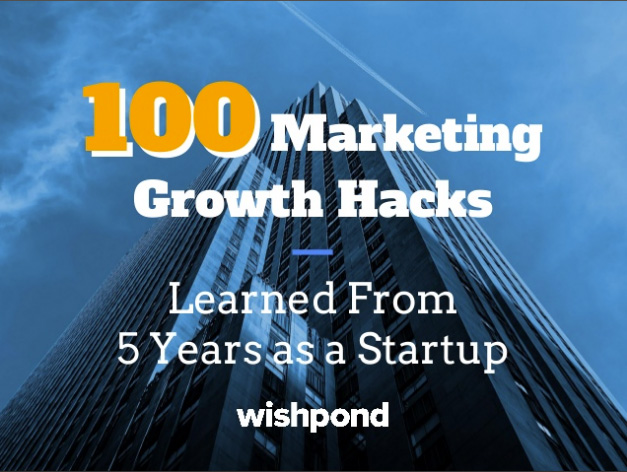 Then, rather than jumping straight into the 100 growth hacks (which I might have done before), I added some introductory slides to add some context and story.

This way I was able to set the tone before getting into the meat of the Slideshare.

I also focused on simplifying the message in order to increase readability and flow. This was hard to do at first (since my natural tendency was to group topics together coming from the blog world). In this case, this meant splitting sentences into multiple slides where I’d previously used one.

There were two main components of uploading that impact the chances of being featured on the front page of Slideshare.

The first is to include a complete description of the Slideshare, together with the maximum number of tags which that Slideshare is relevant for. 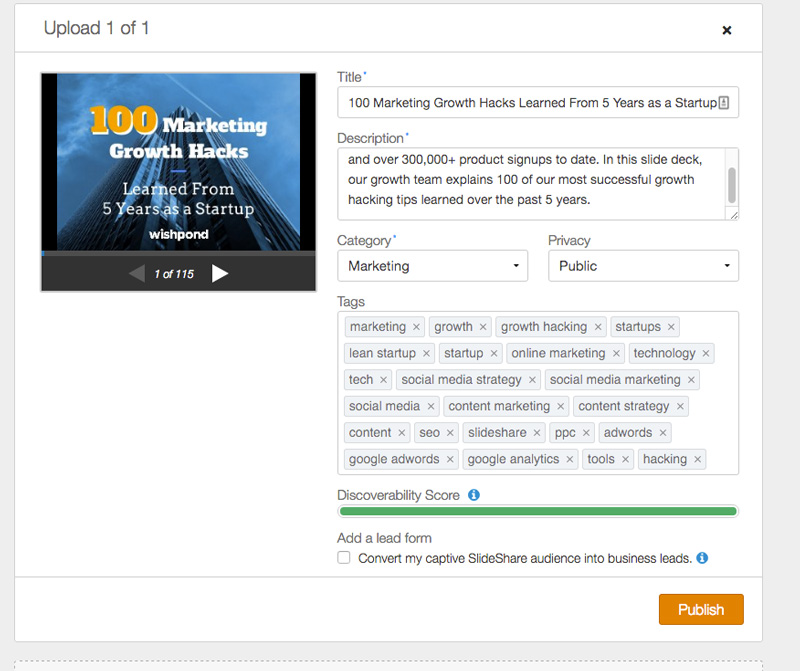 The second is one that I read about from a Venengage article which recommended posting early in the morning in Pacifc Time. This increases the likelihood that someone from the Slideshare team would see the Slideshare when choosing their featured slides for the next day.

I then queued up a couple tweets on Buffer from my Twitter account and Wishpond’s Twitter mentioning @slidesharetoday and @slideshare. I also quickly posted the slideshare link in a number of LinkedIn marketing groups (LinkedIn, of course, being Slideshare’s parent company) just to get the ball rolling.

My main focus was to ensure that there would be at least a couple of tweets and social shares by the time it reached the Slideshare team in the morning.

Fast forward to the disco party in our office at 3:15 PM the next afternoon, right after we received an email from Slideshare letting us know that our slide deck was now on Slideshare’s front page. 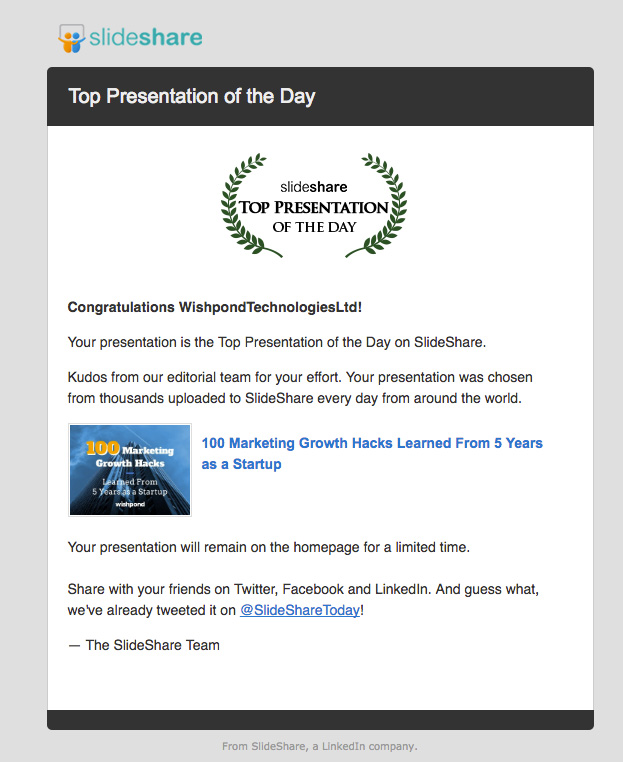 And while the number of views wasn’t much at first, they quickly took off the longer the slide was featured. 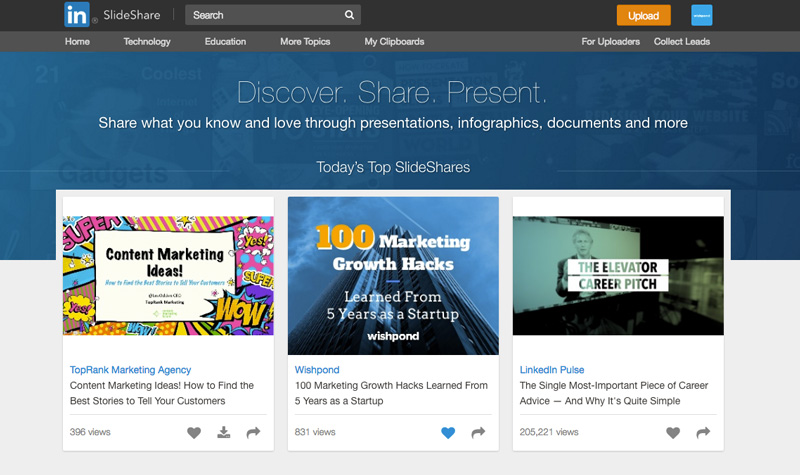 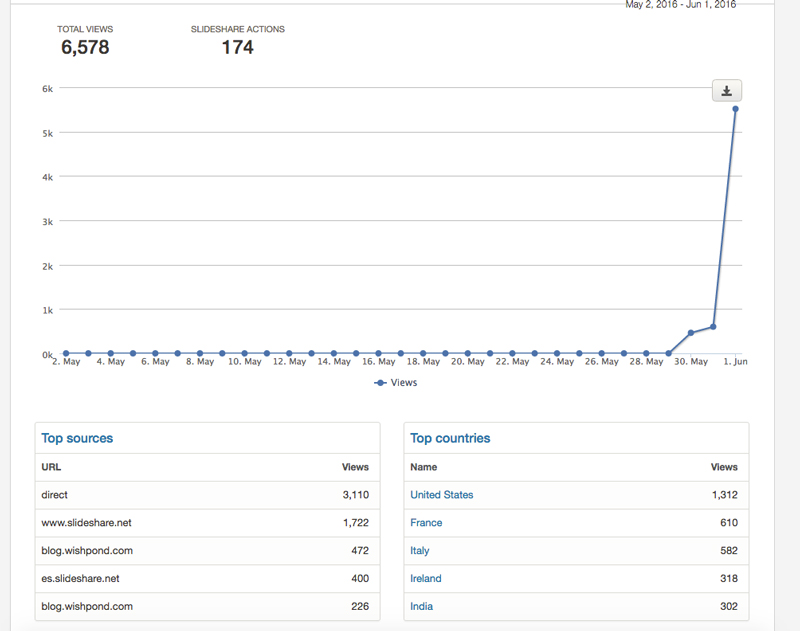 Though this Slideshare has slowed down in the past few days, it’s driven close to 90,000 views and, even better, over two-thirds of that traffic is coming from outside our blog.

It’s a HUGE improvement from our previous Slideshares.

This particular Slideshare was also featured for almost a week on the front page! 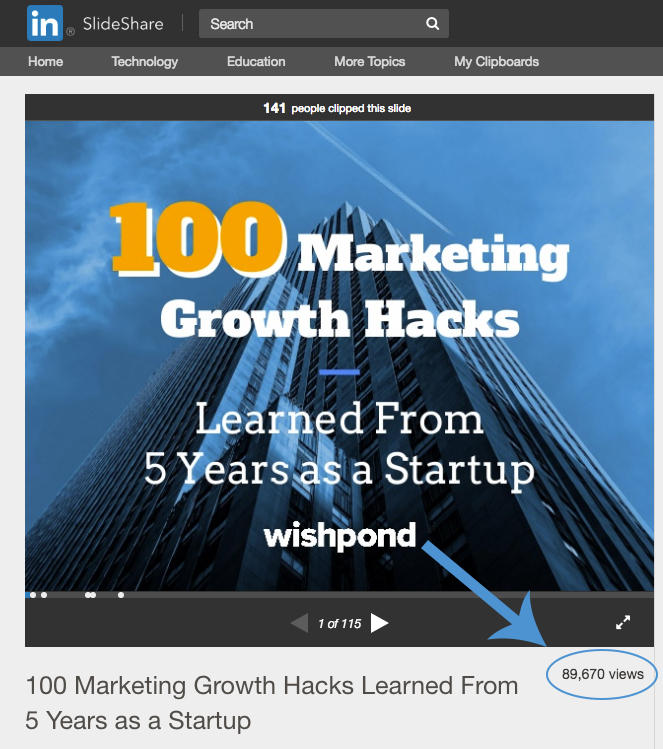 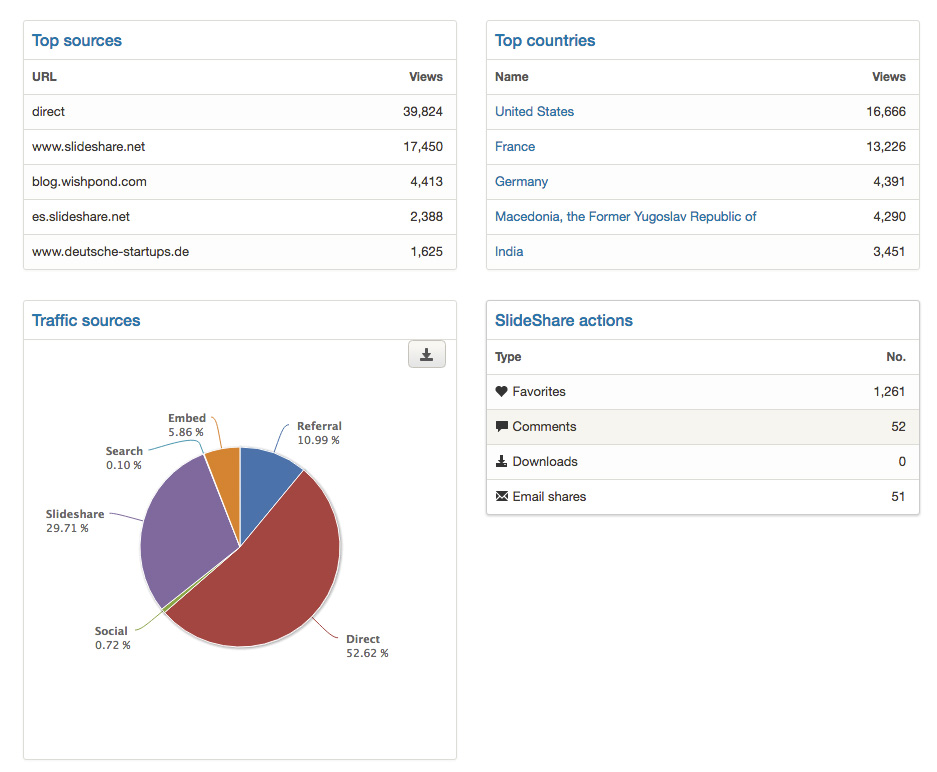 And all of that just from following a couple of tips and modeling what worked from previously successful Slideshares.

I’ll be the first to admit that creating a successful Slideshare that gets featured on the front page is part strategy, and part luck.

That being said there are principles and tricks that you can follow to ensure that your next Slideshare has the best chance possible.

That includes making sure that your Slideshare has the following:

Combine this with a solid outreach strategy (see #3 of Brian Dean’s Skyscaper technique) and you have yourself a recipe for a high performing Slideshare.

Download The
Free Ebook: 100 Marketing Growth Hacks Learned as 5 Years as a Startup