5 Back-to-School Promotions That Work Better than a Sale

Children are crying, parents are silently rejoicing… and marketers are furiously at work.

It’s that time of year again – back to school!

If it wasn’t already obvious from the ridiculous number of commercials and the influx of sales on Sharpies, staplers, and everything school-related, back to school is prime time for marketers to reach potential customers.

While you’re gearing up for the upcoming school season, I’d like to share a few of the most engaging back-to-school contests from last year that businesses ran through the Wishpond platform. I’ll dive deep into each example and show exactly what made each contest successful.

Want to run a Back to School promotion? Get started by talking with a contest expert today!

Back to School Contest #1: Jet’s Pizza

The premise was simple: users captioned Jet Man’s “school photo”, and their captions were publicly voted on. The entry with the most votes won a $50 Jet’s Pizza gift card. 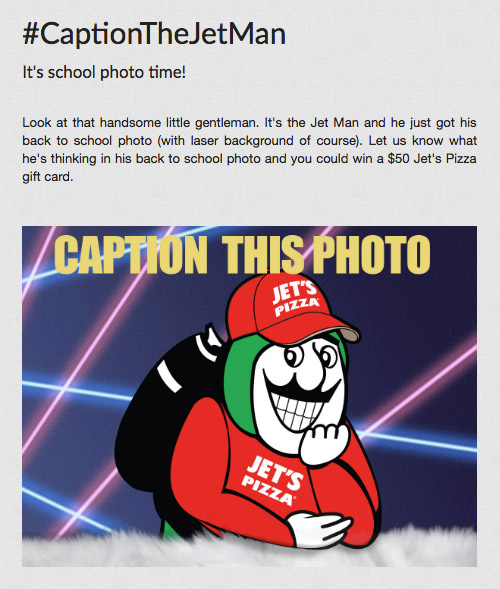 Back to School Contest #2: Cricut

Cricut sells personal electronic cutting machines that allow users to design projects from their computers, tablets, or smartphones, which they can send to their Cricut machine to be produced from different materials including vinyl, cardstock, and leather.

Cricut hosted 70 giveaways in 7 weeks for their back-to-school photo contest with prizes ranging from $40 to $685, including Cricut machines and other art supplies. The theme of the giveaway was “teacher appreciation,” so only teachers were eligible to win.

There were two methods of entry:

Each week, Cricut chose 8 winners and the community voted for the remaining 2. 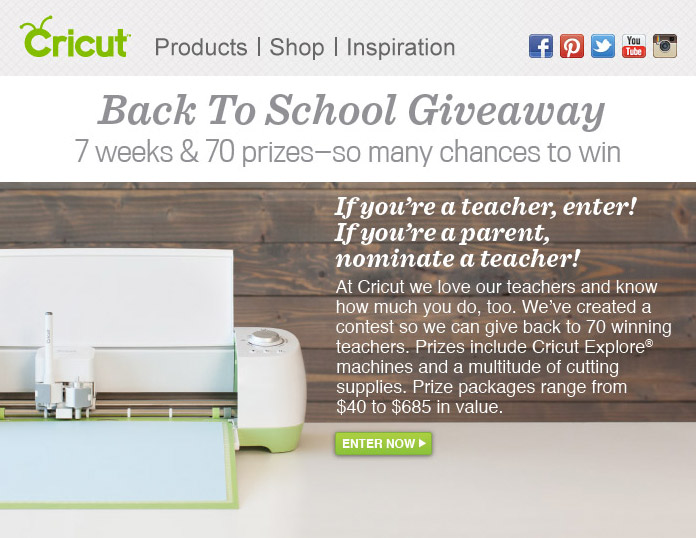 Cricut’s back-to-school photo content managed a humble conversion rate of 25.8%… but get this: They had 1,264 entrants and 24,905 votes! Because voters were eligible to vote once a day, they scored a total of 37,884 conversions. Awesome.

Back to School Contest #3: Prismacolor

Prismacolor ran a back-to-school vote contest with four prize packages valued between $250 and $900. Entrants were required to upload photos of their artwork created using Prismacolor markers or pencils, along with a testimonial explaining why they enjoyed using Prismacolor products.

Because the contest ran around back-to-school time, it ensured parents and children alike kept Prismacolor top-of-mind when shopping for art supplies. 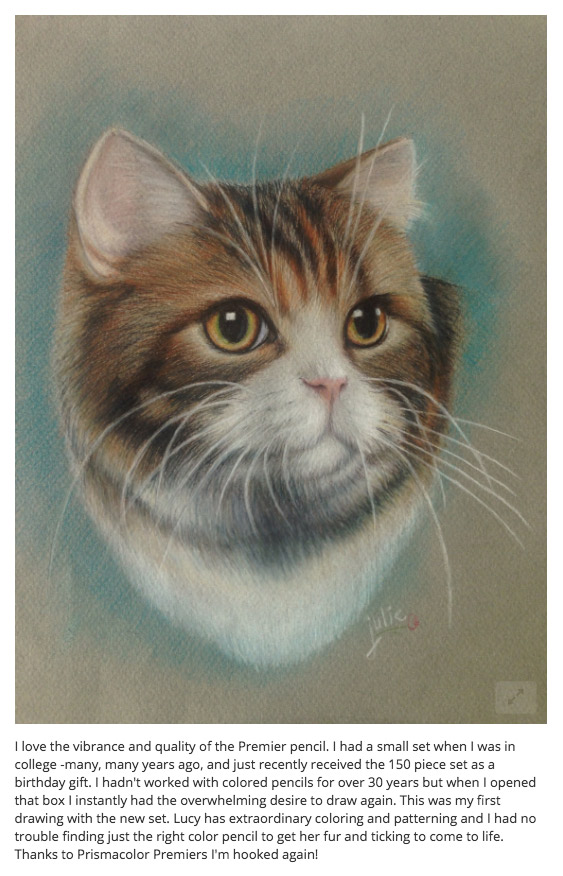 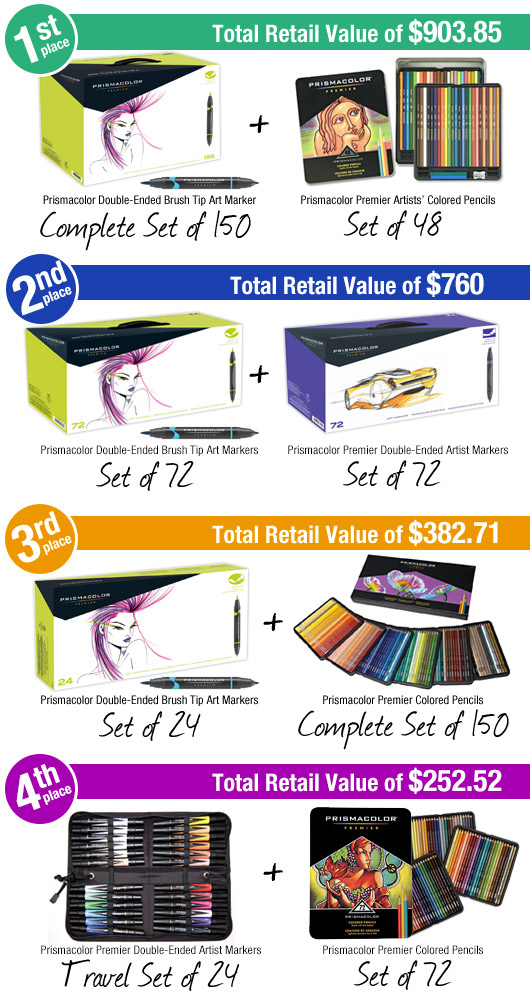 IHT Spirit System, a developer of wearable technology and physical education assessment software, partnered up with Adidas to present the IHT Spirit Challenge – a back-to-school sweepstakes.

To enter, participants needed to provide their emails and post to Twitter saying they were “committed to doing 1 healthy thing today” with the hashtags #UnleashYourBestSpirit and #PhysEd, in addition to mentioning @IHTUSA.

The prize was a “complete spirit system” valued at over $10,000, which I’m assuming was a rather extensive series of wearables, assessment software, and curriculum resources.

Though the number of leads the campaign generated seems underwhelming considering the value of the prize package, there are a few things you can take away from IHT’s contest.

I’m cheating a little because this contest didn’t run during the back-to-school season, but it saw great success and is full of takeaways you can use for your own back-to-school contest.

The PEACE Fund, a non-profit charity with a mission to make a “positive difference to the lives of children living in extraordinarily difficult circumstances” ran a contest called “A New Year, New Opportunities” with the Los Angeles Unified School District. They chose 30 classrooms to participate in a contest, 9 of which won 10 Microsoft Surface tablets.

To enter the contest, The PEACE Fund required each class to create a video showcasing their classrooms and explaining why they needed to win. Winners were chosen by public voting and were announced on The PEACE Fund Radio Show and LATalkRadio.

They split their contest into three – one contest each for elementary, middle, and high schools. I’ll be using their elementary school contest for this example. 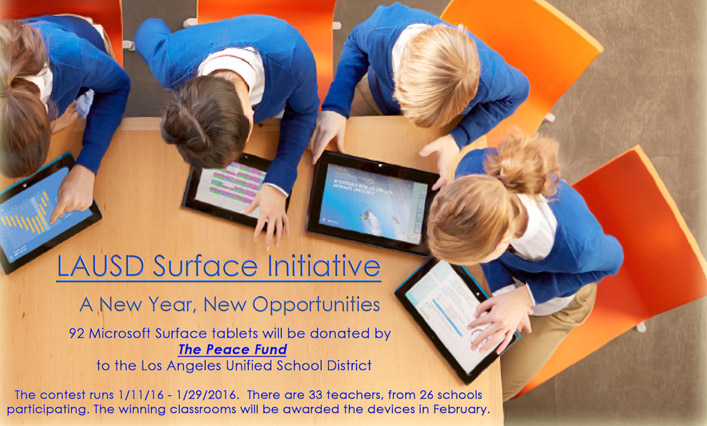 The PEACE Fund’s elementary school contest had 13 school entrants. It received 35,672 views and 4,978 conversions for a conversion rate of 14%.

I hope these tips help you out as you’re gearing up your business for the back-to-school season! We all know by now that contests are a great way to spread awareness and increase your reach – it’s just about sticking to best practices to maximize your results.

Let me know what you think! Are there any other awesome back-to-school contests you’ve seen?