How We Used Facebook Live Video to Grow Organic Reach 300%

I’m going to be straight up with you. Our organic reach on Facebook is pretty miserable.

We’re one of those brands seeing 2% reach – averaging about 400 impressions for each post.

For us, it’s not a massive issue. We’ve never relied on Facebook Fans or engagement to drive sales, or even drive content readership.

So when something comes along which triples organic reach and engagement on Facebook, every social media marketer worth their salt pokes their head up.

This is just such a story.

It’s been just over 12 months since Facebook Live video was rolled out. Many businesses, including ours, are seeing massive increases by tapping into Live video on Facebook. This article will break down a few case studies (including our own) and give you a step-by-step guide to getting the most out of Facebook Live Video for your business as well as what you’ll need to get started.

Rolled out in April of 2016, Facebook Live video was immediately noticed as driving serious levels of engagement over other content. 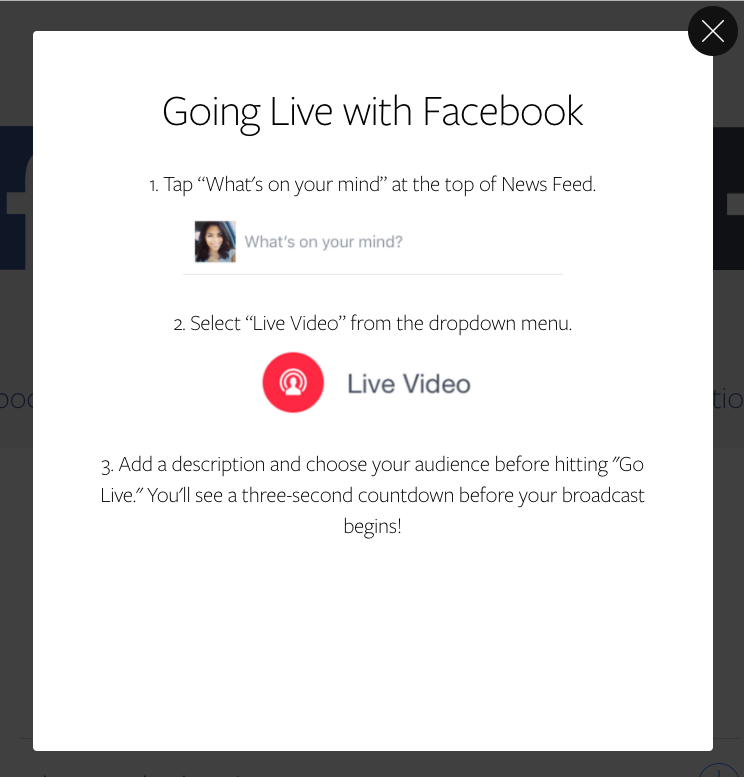 A few cool things to know about Facebook Live Video:

By the end of the 2016, a significant 50% of social media marketers said they were using live video services such as Facebook Live and Periscope, and 50% wanted to learn more about live video.

Before we dive into how you can use Facebook Live yourself, let’s quickly go through a few creative examples from leading businesses who have.

All of these businesses did things you can do yourself, from live-streaming conferences and behind-the-scenes video at an event to (as we did) a simple educational video based on content we know our target audience is interested in.

Case Study #1: Wishpond (Our own Experience):

We’ve only recently started testing Facebook live video. As I said in the introduction, we don’t rely on Facebook for engagement, and haven’t put a huge amount of time into optimizing our presence on the platform in years.

However, after reading a few case studies and articles on how other businesses were using it. We did decide to dive in a couple weeks ago.

Carlo and I put together a whiteboard-style presentation on content upgrades, and their ability to drive massive results with blog lead generation: 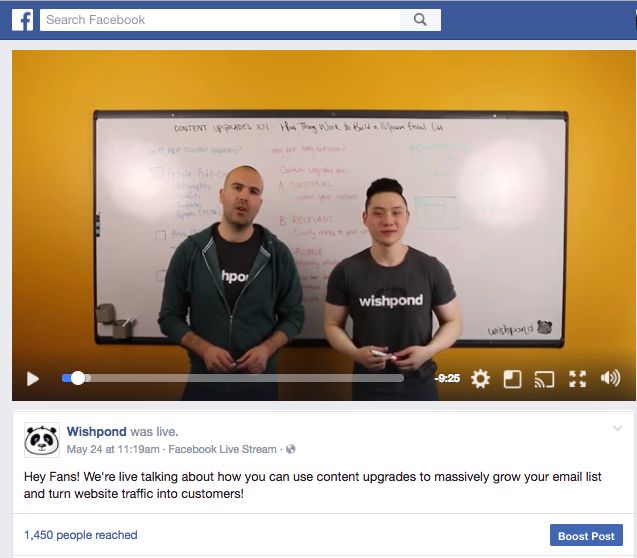 Firstly, we loved the live analytics supplied by Facebook while we were presenting. They’re, officially, the most in-depth analytics offered by Facebook for any of its post types: 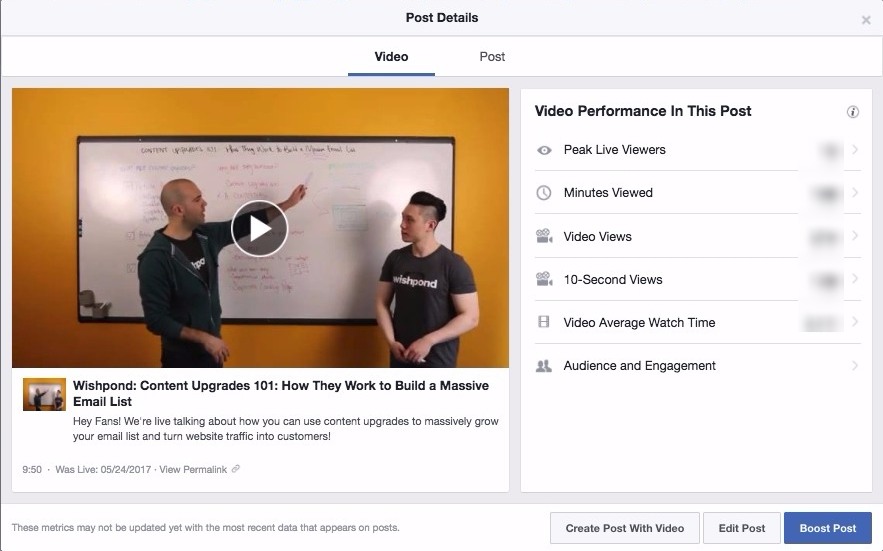 Secondly, and this was only after we were done (sweaty but pleased), we looked at our Organic Reach:

Let’s say, conservatively, that we get an organic reach of 500 for each of our posts (we get less than that, but let’s say 500 for argument’s sake). This Facebook Live video was shown to 300% more people than normal.

Smirnoff ran a social media promotion asking entrants to submit a selfie. Winning selfies were then used to inspire the creation of cocktails, filmed Live on Facebook.

The contest itself garnered more than 600 selfie entries (and thousands of votes). On the video side, it got 2.8 million impressions, reached 451,000 users, had 239,000 video views and generated 46,000 direct interactions.

TechCrunch is a leading technology publishing site. They review new products and break tech and startup news before anyone else. In May of 2016, they broadcast the first conference (Disrupt Conference) live on Facebook.

TechCrunch’s conference featured several different types of video, including video on-demand as well as both polished and raw live video. Their Director of Audience Development said “You can attract larger audiences by serving up multiple formats of video and catering to different segments.”

Their Live videos had 500,000 views over the course of that first conference and, because of the success, they ran a similar strategy for their Disrupt San Francisco conference in September (where they did even better).

The videos from the first conference ended up driving 1.9 million views. The second conference, in San Francisco, drove 6.5 million. 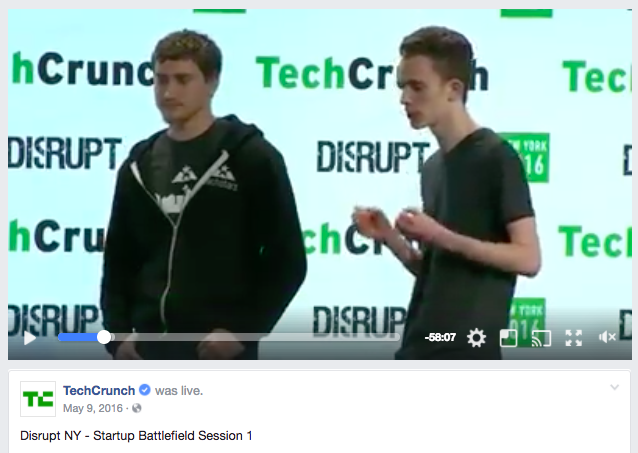 TechCrunch included 5-minute breaks so people could (just as in a real conference) get up and walk around and not miss anything. This was also a necessary component becasue of the restriction on Facebook Live video duration.

They also added regular reminders to the viewers about what was happening and where they were in relation to the conference schedule, and what they were watching.

The YES Network is a TV network which owns the local TV rights for the New York Yankees, the Brooklyn Nets and New York City FC.

Because of the ease of use, we’re able to utilize [Facebook Live Video] in a variety of different ways.

For example, among our most popular streams is when we simply go live outside of Yankee Stadium at a Yankees game and allow our users to absorb the sights and sounds happening in the Bronx. Our numbers show that the voyeuristic nature of these live videos is appealing to our users.

And on the complete other side of the spectrum, we also do a heavily-produced weekly live talk show, complete with multiple camera angles, user comments, and graphics normally seen on linear programming.

In addition to all of this, we also go live during games featuring our talent interacting with users about the action they’re seeing on YES; we regularly shoot pre-game production meetings; we interview players before games; and when our studio shows go to commercial, we often keep the cameras rolling for a behind-the-scenes look via Facebook Live.

It gives us another tool to help accomplish one of our chief goals, which is to drive tune-in to our network. When we go live outside Yankee Stadium or stream behind-the-scenes video of our pre-game show, we’re creating awareness for our on-air product. So when a user is sitting on his or her couch thumbing through their Facebook timeline and sees that one of their friends commented on our stream, we just reminded somebody new that the Yankees or Nets are on the air on YES. That’s incredibly valuable to us.

If you’re scared of going completely live with your first video, that’s okay. Facebook is actually okay with that. They have a great walkthrough for encoding from existing software right here. We actually used OBS for our first video. 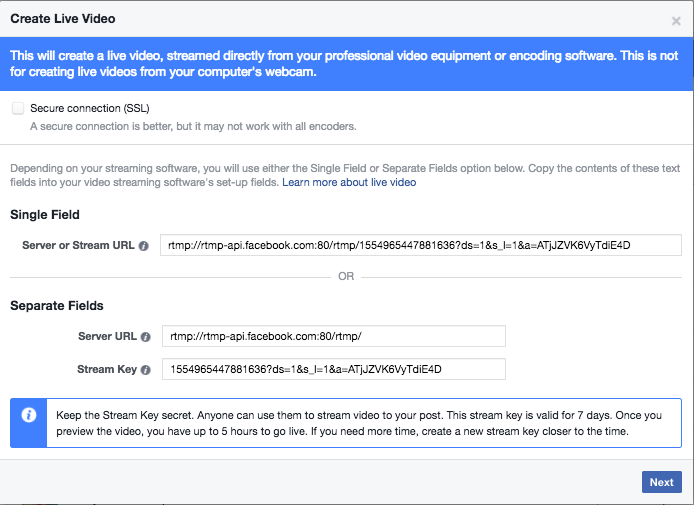 So Facebook’s “Tips and Tricks” walkthrough is actually really good for Facebook Live, so I recommend you give that a look over before diving in.

1. Introduce the video topic, and yourself, multiple times

This was something we did poorly in our first video. In many ways, we were treating it like a podcast: trying to cover a single topic in an educational way.

Consider that if people come into your video 30 seconds into it (because of the engagement of the first 30 seconds) they’ll leave as soon as they get there if they can’t figure out what your video is about.

And, if (like us) you have a subject for your Facebook Live video, try to figure out a way to put it within the frame to provide a reference point for people who start watching halfway through.

And keep introducing that topic, even halfway through.

You’ll lose people quickly if your Facebook Live video is just you sitting at your desk (unless you’re doing something super interesting while sitting there). Get up and walk around. Show people things, colleagues. If you’re using a tripod (as we did), be sure that the static scene being captured has a lot of action in it.

Your introduction, as I said above, should be at least a couple minutes. And as people start showing up and engaging, your organic reach will go up. If you don’t have a longer video, people will show up only for the video to end.

Half the fun here, for both yourself and your viewers, is that this video is Live. It’s spontaneous. If something falls, pick it up (though try not to cuss, as I did…)

This is especially true at the beginning of the video. The more people who Like, Comment or Share your video in the beginning, the more Fans it will reach while it’s up, and afterward as well.

And it’s far harder for people to say no when you’re face to face with them.

One of the cool parts of Facebook Live Video is that people can comment on your live videos. Responding to those comments in real-time is a big part of encouraging more comments and more engagement. Get a friend or colleague to man the comment section while you’re presenting.

7. Tell Fans and Followers (and even email subscribers) when you’re going to be live

You’ll get a better result with organic reach if you have a bunch of people waiting for you to go Live. Encourage them to share as soon as they get there to drive more people to the video. 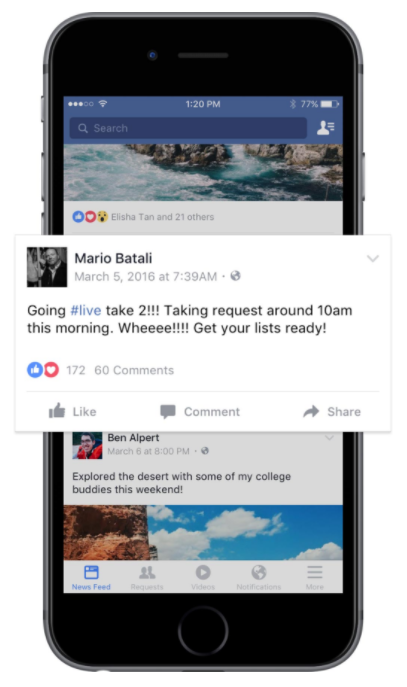 Tools You’ll Need to Check Out to Go Live

If you’re going Live from a standing or walking around position, you’ll need…

If you’re going Live from your desktop, you’ll need…

If you’re going to stream or record first, look into…

Facebook Live is one of those digital marketing strategies you can do casually from your phone and with no preparation whatsoever. It’s also one of those strategies (like the TechCrunch case study above) where you stream your conference live with multiple, static cameras and lighting.

And that’s, more than anything, what I love about it. It’s an universally accessible strategy without limitation. Whether you’re a sole business owner trying to get your consultancy off the ground or a multi-national corporation looking to stream your quarterly board meeting, Facebook Live will increase your visibility.

I’d love to hear how you plan on diving into Facebook Live. Let me know your thoughts and plans in the comment section below!