Heard you have the attention span of a goldfish?

While there is no research to back that statement up, the Technical University Of Denmark released a study, which claims that the human attention span is narrowing. Meaning, shorter ads have a higher chance of being viewed all the way through.

Creating ads with videos can help to boost your conversions and hold the attention of your audience. After all video marketing has been listed as one of the top marketing trends for the past five years in a row.

Making a long converting ad is a struggle, creating a short and entertaining one—might end in a disaster.

That’s why in this article, I’ll give you tips to create a well-performing thirty-second ad.

People are exposed to around 5,000 ads a day. When you know that thirty years ago this number reached barely two thousand, it makes you consider how much the advertising world has changed.

If your ad runs every day, it still needs to compete with thousands of other commercials for space in the consumers’ mind. Thus, you need to make sure that the audience you want to reach is inclined to listen.

One of the ways to capture attention is by starting the ad with a product. This strategy leads people who are interested in what you offer to pay attention and doesn’t touch upon others.

Here’s an example from Coca-Cola:

In its ads, the company showcases the product while talking about it. Whenever you see a Cola bottle, you know that it’s their brand, and you’re reminded of this great refreshment.

Of course, Coca-cola uses its well-known brand as the basis of its ad, but if you don’t have that, it’s still possible to use the same tactic. Dairy Farmers of Ontario prove this with their milk ad:

It starts with a splash of milk and fast-paced music. It catches your attention with the elements of simplicity and drags you in as the ad goes further.

On their Youtube, you can find the same video ad campaign in different lengths and see which one you prefer.

It showcases how compelling shorter ads are. Noting that the shorter the ad, the more views it actually got.

Another way to capture attention is by showing a celebrity or relatable setting.

Every Bubbly video ad campaign is colorful and fun, but this one combines a relatable setting and features Michael Bublé:

This combination not only captures your attention but also makes you want to see more.

Having a message that is consistent throughout the ad is important no matter what’s its length. Otherwise, your video ad campaign can’t reach any goals, not to mention figuring out who is your target audience.

However, shorter ads require you to prioritize and tell a story in an even more structured manner as you have less time to present or elaborate on the context.

A simple idea, with the meaning of donatable organs, put into a balloon that’s carried through the ad. It provides enough information to make you research or simply memorize the changes in donation rules.

Most of the successful short ads portray a consistent theme, thus emphasizing and revealing the message.

One of my favorite commercials is the Colgate Superbowl ad.

In it, they use one of the attention strategies mentioned above. They show Luke Wilson, a famous actor, as a storyteller.

The ad carries out a message that with Colgate's toothpaste, your breath will be great.

It’s shown in an extreme manner, but it’s what makes this video ad campaign impressionable in the first place.

Finding a simple concept that showcases your message is a goal to hit when creating thirty-minute ads.

3. Have a Beginning And an Ending

“Dairy Farmers of Ontario” started with a product and ended with what milk can’t do, implying that milk can do everything.

“Bubly” ends with a protagonist trying to fix labels.

“Colgate” ends with mocking the exaggerated lack of space between the main character and others.

All of these commercials had a beginning and an end. That’s essentially what makes them succeed.

When developing an idea, a good starting point is to know how you want the ad to end.

That way you can plan how to go there, rather than, what you want to say. It works just like writing jokes, the punchline is the most important, but the story needs to be enjoyable for people to get to it.

Small scripts are written for all types of commercials since it needs to be measured and timed to the second.

It doesn’t need to be a masterpiece. You’re not writing a script for a movie, but it has to be more descriptive than a movie scene.

Write down your ideas in a dialogue format. Make sure you know who has to say what, and time it. In case you can’t finish reading it on time, adjust it. The end result should look like this: 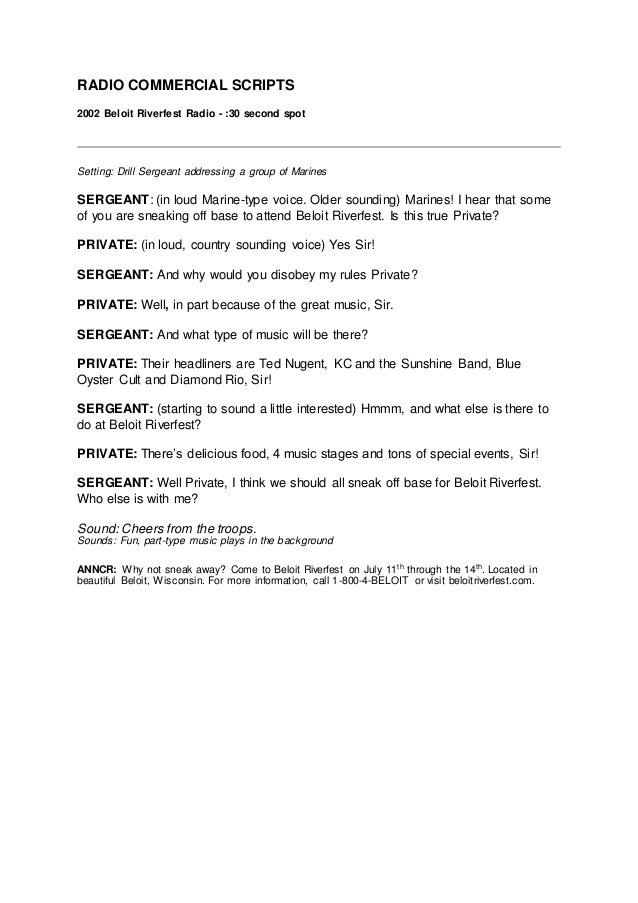 This example is focused on radio commercials, but let’s visualize it as a tv or social media ad.

Now, you need to create a timeline. Start with drawing a line and putting a beginning and an ending points for guidance.

Measure your reading time, and have breaks to breathe slowly. It decreases the possibility of delays in your final ad and makes this timeline more realistic.

Add timestamps to your line:

At the top, are script events and conversation points, while the bottom part has technical details.

The radio script provided has proven to be too long for a visual ad. That’s why in this timeline, the following adjustments are made:

With these final adjustments, the ad timeline works perfectly. However, this is only an example. Your timeline needs more details and comments. The goal of it is for you to have a clear idea before presenting it or spending your budget.

5. Use a Mockup Video

Do you know that fashion designers make a mockup version of clothes before sewing the real version? They create it from the cheapest materials. And while it’s not pretty, it creates a valuable insight into sizing, design choices, and sewing preferences.

That’s why you need a mockup. You will show ads strong sides, message, story, and length, which ultimately describes the potential of your commercial.

Sounds scary? You don’t need to have any skills, just take a piece of paper and start.

You can draw tiny pictures on paper and film them. 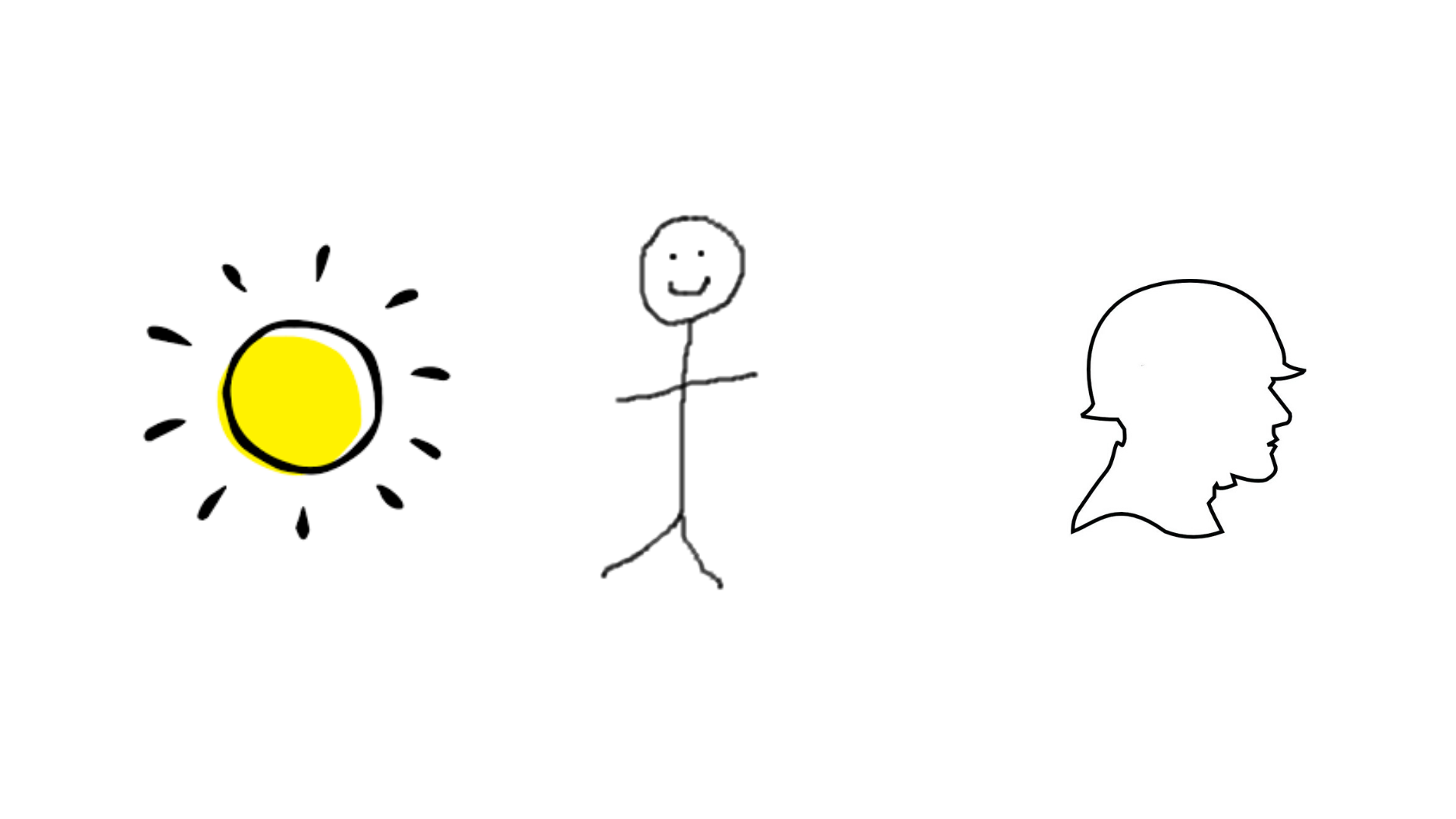 It can be stick mans or dots as long as it indicates characters.

After you film pieces of paper with different settings on them, add a voice-over creating a personality for every figure.

Don’t hesitate to add names that are in your script. That way you will make it easier to follow.

Creating this video is a crucial step before producing a final ad. Going through it and succeeding will give you confidence in your project and help you systemize the filming aspects.

Play with the outcomes, and when you find the one, convert it to a professional video.

If you can film a mockup that has a clear message, beginning and ending, and is thirty seconds long. The filming crew will have no problems staging it and reaching the best outcome.

Creating a great ad comes down to structure and preparation. One can’t succeed without another.

Following steps that create clarity in your project will significantly increase the chance of success.

We can’t predict how well audiences will react to the message, but we can execute ideas the right way.

What tips do you have? Share in the comments below. 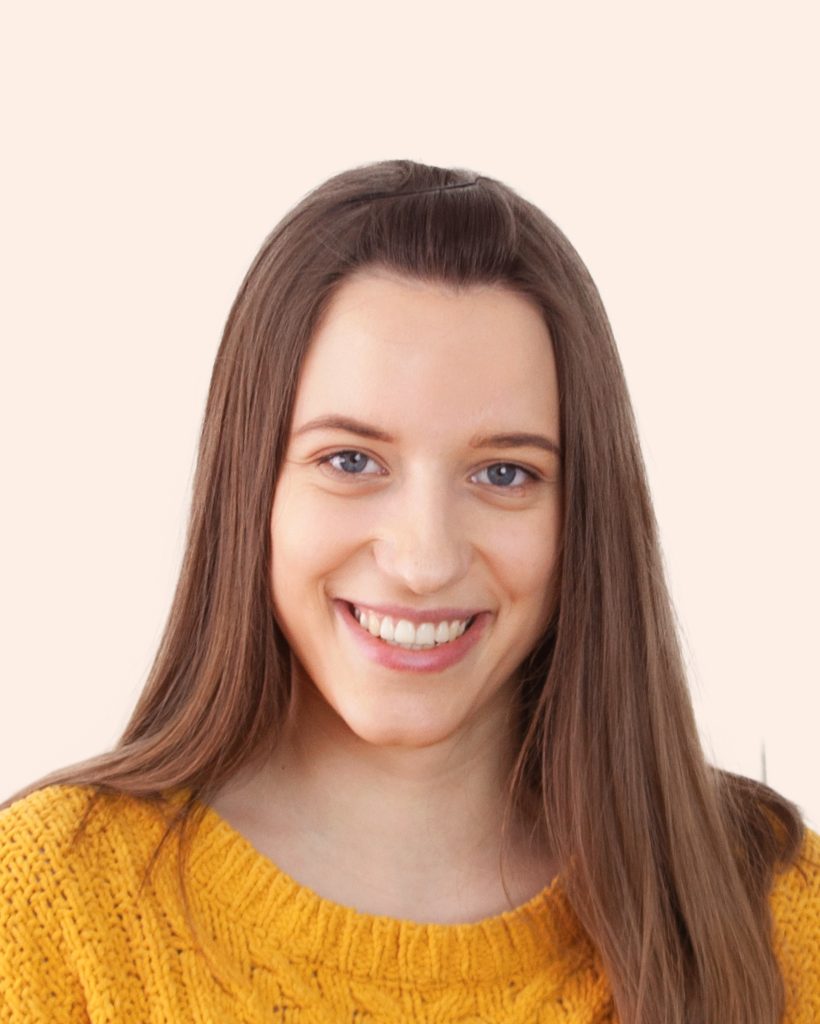 Aiste Macyte is a content marketer at Sleeknote: a company that helps e-commerce brands engage their site visitors—without hurting the user experience.